We All Love the Beautiful Stories #CanLit #Storytelling #AmReading 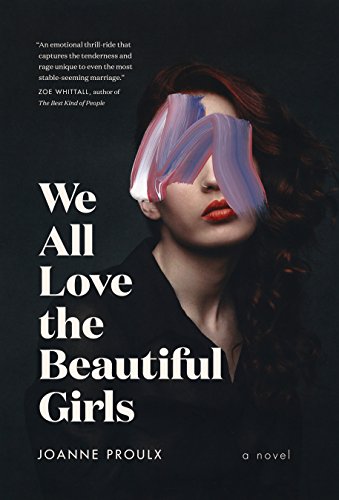 I just finished reading a novel called We All Love the Beautiful Girls. It's Canadian literary fiction by Joanne Proulx. I don't think I've ever read a book the year it came out (I'm very behind the times that way), but I found it in a Little Free Library near my house. The title and the cover appealed to me. I'll admit, I thought there would be lesbians. Spoiler Alert: there weren't.

But instead of talking about the book, I'm going to talk about my family. What else is new?

A boy passes out in the snow.  He gets frostbite and loses a hand.

Now, here's why this story hits home for me...

My grandma loved her dad. When her parents divorced, she chose to live with him. When my grandmother married, he came to live with her.  I think he slept in her kitchen. I know my uncle slept in a drawer. But this was the late 40s, so I guess people were just sleeping all over the place.

I never met my great-grandfather, but evidence suggests he was a kind and caring person. He came here from rural Scotland, where he'd been a farmer. During the First World War he worked with horses, and when he came to Canada he continued in that vein, working in stables where milkmen kept their teams.

He wasn't much of a drinker, as far as I know, but one New Year's Eve he went down to the pub.  I guess he drank much more than his body was used to, because on his way back he passed out in a snow bank.  He wasn't far from home.  My grandmother tells me the snow bank was right in front of the house.  She's the one who found him there the next morning.

I'm telling you the story of how my great-grandfather died.

But I'm making choices about how I tell it.  I could stop right there.  Everything I've told you is true.  However, the implication is that, when my grandma found her father in the snow on New Year's Day, he was already dead.  That's not the case.  It's the best version of the story of my great-grandfather's death, but it's incomplete.

Because, when my grandmother found her father in the snow, he was still breathing.  They rushed him to hospital, where he died of pneumonia three weeks later. He never got out of that hospital bed.

Good storytellers choose the best possible version of that story.

This is a lesson I learned from my aunt, who, I now realize, is the person who taught me how to be a storyteller.  When I was a child, I found her stories spellbinding. Now, as an adult, I still do.

In fact, just this weekend she told us a very evocative tale that drew on every sense. Her siblings all agreed that, the way she'd told it? Yeah, that's not the way it happened. Nowhere near.  There was a consensus that her facts were way off.

But does that matter? To me? I guess it doesn't. It doesn't make a difference whether my uncle came in through the front door or the back.  That doesn't impact the heart of her story, and my aunt's choices add nuance and build strong images.

Would it do an injustice to my great-grandfather if I led you to believe he died in that snowdrift, in the wee small hours of New Year's Day? When, in reality, he died in a hospital bed three weeks later?

Giselle Renarde is an award-winning queer Canadian writer. Nominated Toronto’s Best Author in NOW Magazine’s 2015 Readers’ Choice Awards, her fiction has appeared in nearly 200 short story anthologies. Giselle's juicy novels include Anonymous, In Shadow, Seven Kisses, and The Other Side of Ruth.
Posted by Giselle Renarde at 1:44 AM

Email ThisBlogThis!Share to TwitterShare to FacebookShare to Pinterest
Labels: #amreading, Canadian literature, death, family, storytelling, what are you reading, what i'm reading, winter