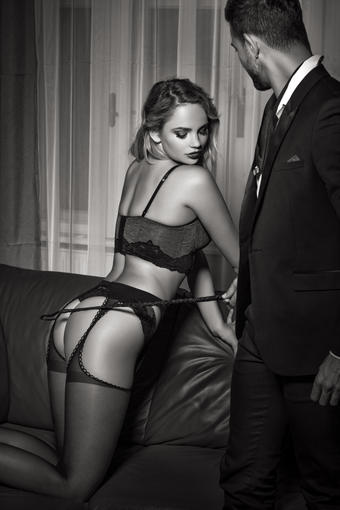 This month, our group topic is “Pushing Limits”. This theme could be addressed from a wide variety of perspectives: pushing one’s limits as an author, by trying new genres or formats; pushing one’s physical limits (I’m thinking of KD’s and Ashe’s pole dancing classes); pushing the limits of society’s acceptance for erotica. However, as I’m first up, I decided to take the more obvious route and discuss the topic as it applies to dominance and submission.

Although I have a reputation for publishing hot BDSM erotica, I have only modest real world experience. I’ve been involved in one D/s relationship which was quite serious and intense but which lasted, in its active phase, only about two years. Furthermore, during that entire period my Master and I lived in different cities, and early on, on different coasts. So the amount of time we actually spent together “in scene” probably totals no more than a month or two. Nevertheless, that was enough to profoundly influence my sexuality, my world view, indeed my life. Lisabet Sarai very likely would not have existed if not for GCS, to whom many of my books are dedicated.

Regular readers of the Grip will know, from my frequent posts about him and that relationship, how strongly connected to him I still feel, even forty years later and more physically distant than ever.

Part of the thrill of BDSM, however, comes from its unpredictability. If you know exactly what your Master is going to do, a scene can lose its intensity. In addition, a sub gets at least some of her pleasure from the knowledge that she’s satisfying the Master’s desires rather than just her own. What if she’s scared of the idea of getting caned, while her dom is itching to find a nice, flexible rattan rod and turn her butt bright red? Though he might choose to respect her limits at the expense of his own fantasies, she can’t help but be aware of his disappointment and feel as though she’s failed in her devotion to him.

So what about me? When I began my all-too-brief, incandescent relationship with GCS, I knew next to nothing about BDSM. I’d entertained myself with kidnap fantasies growing up, but I’d never thought of myself as the slave type. The concept of limits didn’t apply. He tempted me to step out onto the high wire of power exchange and I followed eagerly, scarcely looking down. At his invitation, I plunged into the murky depths of kinky lust. He gave me reading assignments, The Story of O and Anne Rice’s Beauty series. I devoured them, hungry for more. Whatever he suggested, I was willing to try. Indeed, I even took the initiative, searching out a riding tack store to purchase a genuine riding crop so he could use it on me.

When we were apart he’d quiz me about my reactions to various ideas, or send me images for my comments. He wrote in a letter once, “It never occurred to me that you’d refuse me.” As arrogant as that sounds (and that arrogance thrilled me), it was more or less true.

I understand now that I do have some hard limits: choking or asphyxiation, punching or being hit with a blunt object, extreme sensory deprivation, being fucked in the pussy by an object that has been in my ass. I don’t like the idea of being gagged. Needle play scares me, though I can’t say I’d never do it. But he and I never got to that point. We were still in the breathless, experimental stage—he probably marveling that he’d found such a willing partner, me overwhelmed by the emotional impact of surrender—when we officially broke up. I married a lovely, horny, but definitely vanilla guy. He found another sub, at least for a while. We never really got to the stage of pushing limits.

My memories and feelings for him fueled my first novel and have had an enduring influence on most of my stories since. As I continued to write erotica, I found myself using my tales to explore alternative worlds in which we’d stayed together. What would it have been like, to live together, perhaps to marry? How would our kinky games have evolved? How do you keep the thrill of BDSM alive when your relationship includes all the real world stuff: work, finances, family, illness, children, aging? Can you continue indefinitely to push limits into more extreme activities? How do you know when to stop? And if you do stop, if you draw lines you know neither of you dare cross, will the magic evaporate?

One of my most emotional stories of this type is “Limits: A LoveStory”, about a long-established D/s couple who decide to advance to his cutting his initials into her flesh. That story begins:

He's the sadist in our relationship. But I'm the one who's more extreme.

This succinctly captures my fears about myself. Do I really have limits? Would I know when to stop? Would he? And if he did, would I be disappointed?