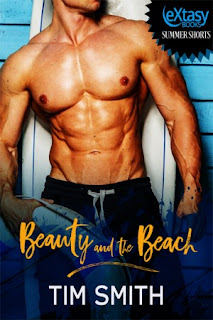 
This month I’m highlighting the second book in my Key West Heat series, “Beauty and the Beach.” This one was released last year. It’s a short fun read about two people who enjoy a casual romantic relationship while working together. They find themselves on a small resort island called Sunset Key, a short distance from Key West, Florida.


“When supermodel Brandi Knox is hired for a tropical-themed magazine spread, she insists on having her favorite photographer, Justin Malone, do the job. He arranges the shoot on Sunset Key, near Key West. The two have been involved on and off for several years, in a friends-with-benefits situation. This time, their feelings for each other seem to have developed into something deeper. When the sun finally sets on their latest assignment, will they still be just friends, or something more?”


The inspiration for the main characters came from personal experience. I’ve been a photographer since I was in high school, and I still do occasional work as a freelancer. In addition to weddings and family portraits, I’ve done a lot of amateur model shoots with aspiring Christie Brinkley wannabes. For the record, most of them didn’t have what it takes for the runways, but it was still fun. I needed a fresh romance idea and came up with this scenario, about a fashion photog and a supermodel who have worked together for a few years and have a friendly, flirty relationship. There is more than just co-worker fantasy between them, though. Since this is an erotic romance, the encounters are hotter than the Keys humidity. Here’s an example:


They turned their attention back to the sunset. When it crested, then disappeared over the Gulf, they heard the loud cheering of the crowd on Key West. Justin looked in that direction and saw the hoard of people dispersing on Mallory Square in search of more liquid refreshment.


Brandi sipped her wine, then cradled her glass. “Our very own private paradise. Sometimes I think I wouldn’t mind living like this.”


“I had you figured for a cabin in the mountains type of girl.”


“That would be nice, too. You should come visit me sometime. My place has a great view of the Smoky Mountains.”


She reached over and traced a pattern along his forearm with her fingernail. “Ever made love in the mountains?”


She laughed. “And all this time I thought it was just lusty euphoria.”


Brandi moved over to sit on Justin’s lap, facing him. She straddled her long legs over his, then rested her arms on his shoulders.


Justin pulled her face to his and kissed her deeply, probing her mouth with his tongue while his fingers massaged the back of her neck. He inhaled her freshly-bathed scent and musky perfume, and the aromas increased his arousal.


Brandi ran her fingers through his hair and kissed him with growing passion while grinding her crotch against him. After a few minutes of tongue dancing, Brandi pulled her face back and caressed his cheek. “You’ve got me feeling frisky tonight. Did you know you have that effect on me?”


“And do you not feel the tent pole poking you from underneath?”


She gave a soft, wicked laugh. “Oh, yeah, I feel it.” She gyrated her pelvis against him. “Dry humping you in public is fun.”


Justin placed his hands on her ass and fondled her. “Real humping is more fun.”


Brandi continued moving on him. “What is this fascination you have with my booty?”


She kissed him. “You like to photograph it, play with it, make love to it…”


“Not since you broke it in. You made me weak in the knees the first time you slid that pole of yours between my cheeks. Made me come buckets.”


Justin pulled her face in and hungrily kissed her. “Now you see what effect you’re having on me.”


“Then let’s do something about it, before I slide off your lap.”


This story has humor, realistic atmosphere, likeable characters, and a hot interracial romance. Just the thing to raise your internal thermostat before you dive into the pool to cool yourself off. You can find it at the link below. Happy reading!

Amazon "Beauty and the Beach"
Posted by Tim Smith at 12:01 AM