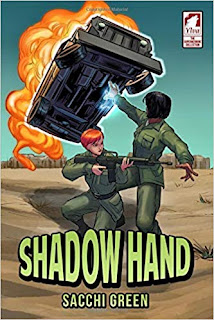 Fair warning! This post is going to present a hot sex scene, sandwiched between several layers of political and historical angst.

I know this is supposed to be my turn for a promotional post, but I’ve been distracted the last few days by certain world events. My heart aches for the Kurds in the Mideast, being abandoned by their US allies for whom they’ve fought so hard and well in subduing the IS forces. Now Turkey is free to attack and destroy them, and they’ve already begun.

As it happens, my superheroine novel, Shadow Hand, deals in part with the Kurdish and Yazidi forces, specifically with the women’s units of their Peshmerga army. I’ve done a great deal of research on the history and landscape of the unofficial country of Kurdistan, presently carved up between Syria, Iraq, and Turkey. I almost feel that I’ve been there, with my characters, organizing a rescue operation to free hundreds of Kurdish and Yazidi women imprisoned by the IS to be sold as sex slaves.

The book isn’t erotica, but it does have some steamy intervals, and I’ll share one, but first I’ll try to explain the context as briefly as I can.

My two main characters, Cleo (Sergeant Brown) and Ash (Lieutenant Ashton), have been stationed in the Mideast and working together. They’ve also secretly become lovers, in spite of taboos relating both to rank and orientation. In the book’s first section (out of three) Ash and Cleo have nearly been captured by the enemies, and are saved by hiding in a shallow cave in the bank of a dry wadi, where an ancient hidden statuette of the goddess Ashtar injects Ash with a superpower, telekinesis. Cleo tries to help Ash adjust to her unasked for power, and learn to use it, but a series of events gets the attention of an Army PsyOps officer, and eventually Ash goes AWOL, and disappears eve from Cleo to keep from being weaponized by the military.

Onward to Part Two, where Cleo and Ash are reunited in Boston, where they gather some sidekicks and use Ash’s powers in several raids on major sex traffickers. They also, however, manage some close together time made more fun by Ash’s abilities. This scene comes just after their reunion.

So where do the Kurds come in, you may ask, if you’ve managed to slog through this far? Part Three, that’s where.

It’s complicated, to say the least. Ash and Cleo are recruited by a Kurdish Colonel, Razhan, for a secret mission to rescue several hundred captive women held inside the reinforced walls of the ruins of an ancient fortress in the desert, surrounded by fields of land mines. Any romantic interludes in this section are muted, and they’re seldom alone together, at first planning and training with a few others in a secluded valley high in the Zagros Mountains, and then with Ash on a crag overlooking the fortress using her powers to wreak destruction on its walls while Cleo, having deliberately let herself be captured along with allies, using her tactical and martial arts on the inside.

But enough of that. What I want to do here is give some idea of the history of the Kurds and Kurdistan. These next two excerpts are attempts to do that without lengthy descriptions.

“Nice! Recommended by former travelers, I see.” Cleo looked along
the stretch of rock wall where words, probably names, had been
chipped with tools or scrawled with charred sticks in the time honored
tradition of “Kilroy was here.”
Mac, also surveying the marks, spoke Cleo’s thought aloud in her
own inimitable style. “Ah yes, ‘I write my name, therefore I am.’”
The sun was so low now that its rays slanted deep into the cave.
“I am happy to see that there are no very recent names here,” Razhan
said. Her stern look at Ariya, who had been there two years ago, said
clearly that there had better not be. Ariya’s response was a smile of
exaggerated innocence.
“Kurdish…Turkish…
“Kurdish…Turkish…Armenian…hmm, could be Italian.”
Razhan turned back to them. “There are caves in the more travelled
parts of these mountains, passes that were trade routes for thousands
of years, where Romans trapping our bears and lions for their
gladiator arenas left their marks in Latin.”
“Bears and lions?” Cleo managed to sound merely curious, which,
on the whole, she was. Bears were familiar from her New Hampshire
home; you just had to keep your food where they couldn’t possibly
reach it, hang it in bags on high ropes between trees when you were
camping. But lions? The fire pit in front of the cave might have more
significance than she’d thought.
“All gone, long ago. They say a few bears are left, in the farthest
reaches, and we have leopards that may not be quite extinct, but no
lions. Gone. Just as the great cedar forests were ravaged to build the
palaces of sultans and caesars.”
Ariya nodded agreement as Razhan spoke. This was the history
taught in Kurdish universities, Cleo guessed. How strange it must
be to belong to a land where mankind had lived and died, come
and gone, and ravaged more often than not, for so many millennia.
Not that her own country’s history had been all that different, but
the ravaging by Europeans of the indigenous cultures there had
happened a few hundred years ago instead of thousands.

And one more, the last (at last!) when Cleo wonders whether she should dye her red hair to pass as a Kurdish woman when she gets captured.

Razhan’s face was just perceptible in the faint glow from the
dashboard. “We’ll darken it a bit with nut juice, to keep you from
attracting too much attention, but red hair is not unknown here.
Those Roman and Greek and even Nordic travelers who took so
much from these mountains left traces behind them as well. A girl in
town has red tints to her hair, as have her mother and grandmothers
through many generations. We also have fair-haired people. Prick a
Kurd and you see the blood of the world.”

So there it is, my long-distance affair with the Kurds. But even without that, even if I had never researched and written about them, my heart would still ache for them now.