Do Two Half-books Count as a Whole?

I don’t usually try to read more than one book at a time, but right now I’m in a quandary, half-way through both Michelle Obama’s Becoming and Where the Crawdads Sing by Delia Owens.

As a writer myself, and a voracious reader in my youth, I feel a certain amount of guilt that I buy so few books these days. Of course way, back in adolescence when I was devouring at least three books a week, I wasn’t buying them either. I practically grew up in a library. These days I do buy the occasional ebook, usually by an author I know, but even then I don’t always get around to reading them.

One great thing about library books is that they have to be returned by a certain date, which is good motivation to read them fairly soon—or more often than not, in my case, to listen to them on CDs in my car. I get weekly emails from my local library listing new acquisitions, and when I see a book that I’ve been intrigued by offered on CD, I can get on a waiting list (usually very long.)

There can be a down side to this method, though. These two very long new books became available for me at more or less the same time. There was no way that I could finish both of them before they were due to be returned, and certainly no long enough roads trips for listening to both of them, even though in the past month I’ve driven from western MA to the Mount Washington Valley in NH and later to Provincetown on the tip of Cape Cod. 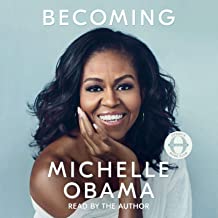 Becoming came through a few days ahead of Crawdads, so I started that and was immediately entranced, even though I already knew most of what one might call the plot, insofar as a memoir has a plot. I knew Michelle had grown up in Chicago, went to Princeton and then Harvard Law School, mentored Barack Obama in his first job as a lawyer in a prestigious Chicago law firm, left the law for responsible positions in more socially conscious and useful work, and eventually became the First Lady of the United States. In her book, though, I felt that I came to know her as an utterly real person, and saw the ways her early life in a solid, middleclass family on Chicago’s South Side were so similar to almost all of our families, while having their own individual traditions and perspectives as most families do. The main difference between Michelle Obama and most of the rest of us has been her outstanding intellect and blazing determination to succeed at worthwhile work. I had to return the book at about the point of when it got to Barack Obama’s first term as President, and in one way I’m eager to read the rest—her writing is excellent, and relatable, and entertaining—but in another way, knowing what has happened to our country since his two terms, it might be depressing to read more about those better times. I will, though, and I have the book on CD again now, since the waiting list has apparently slowed and when I made another request it was fulfilled right away.

In the meantime, I started on Where the Crawdads Sing, and became just as entranced in different ways. The protagonist, Kya, has a life far different from most of us. She lives in a shack in the marshes of the Outer Banks of North Carolina, and has been there alone from about the age of ten. The rest of her family members have left, one by one, mainly due to the violent nature of their father, and even though Kya does manage to soften him somewhat, he too abandons her eventually. But Kya survives, living on the abundant seafood she knows how to catch, and the plants her mother had taught her were edible, and her own deep love and knowledge of the marsh and all its ways and inhabitants. Half-way through, as I am now, and waiting for a chance to get the book again, I’ve followed her through scrabbling for survival, coming of age, first love (a boy who had known one of her brothers teaches her to read and do math and brings her books but eventually goes off to college and has academic plans that can’t include her,) and through several more years while she matures, having learned not to trust anyone, but still lonely for contact. There’s also been a so-far separate story developing, of a mysterious murder that seems sure to bring her accusations from the nearest townfolks who have come to regard her as witchlike, with her knowledge of plants and animals and her lonely existence. I suspect the second half of the book is going to be hard on Kya, and possibly hard on the reader, but there are thousands of positive reviews and recommendations by famous people including Reese Witherspoon, who has chosen it for her book club, so I’m trusting that it doesn’t turn out tb be a downer. Even if it does, I’d read it for the captivating characterization of Kya, and the exquisite writing about nature in the marsh with its lagoons and winding streams and occasional sandy beaches.

So there you have it, two half-books read, and the other two halves yet to be read. I don’t know, can I claim to have read a whole book at this point?