Ode to a Too Virginal Pen 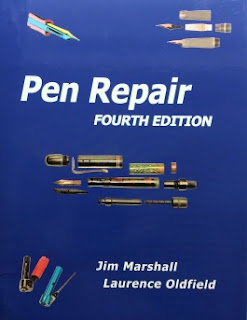 The name on the barrel is “Ruth Schuldt”.

Ruth Schuldt.  It sounds German, maybe Jewish.  A distinctly mundane name, nothing exotic, maybe from Pennsylvania, or somewhere in the Midwest.  It conjures the image of a farmer’s wife, a woman with soft hair, a tired face and calloused hands.  A small farmhouse on a hot August night, where she lies next to her husband of years, long before air conditioning.  Waiting for sleep to come, trying not to think, laying almost nude with the moonlight on the dark nipples of her sweating weighty breasts, wondering if this is the night it may finally rain.  Please God.  Rain.  The wind blows across dried barley tufts swaying in waves in the hot moonlight.

This is a shiny pen, not much used.  She didn’t write much with it, this Ruth Schuldt.  I would date this pen back to about the 1930s or so.  Dust Bowl days.  Around the depression. This pen is very bright to have come from so long ago.  Maybe it was a graduation gift to a school girl, a pen she’s kept in a drawer from better times, nothing to write, nothing to say, but Lord will it rain tonight?

Is she still alive?  Like one of those Playboy Playmates from the early 1960s, fresh skinned, young, with puffy nipples, about a mouthful, at the height of her sexual glory.  Now a grandmother on social security with one or two divorces behind.  “But wasn’t I a dish back then?”

Hi there Ruth Schuldt.  I have your pen.  A Schaeffer Junior fountain pen, made in Fort Madison Iowa, back when we made things.  Lever fill.  I fixed it up.  It works really good now.  I like your pen a lot.  I read the repair book, which cost me a good seventy bucks, Christ, don’t tell my wife,  and did a real good job on this lovely little samurai sword.  Tuned the golden nib like a fine old Martin guitar.  Did you miss it?

Pens like these outlive their owners.  They’re from another time when things were not so easily disposable.  Things.   People.  Lovers.  You repaired things. You repaired love, if you could.  If something broke, other than a heart, you took it to this guy on the corner, he gave you a yellow ticket, you came back in a week and your gadget worked.  When I was a little kid, the TV had vacuum tubes with mysterious plates of stamped metal arranged inside, like science fiction snow globes.  When it conked out, a guy in a uniform with a big black peddlers case of tools and tubes pulled up in a van, unscrewed the back and did his magic. He gave me the blackened tubes.  I pretended they were rocket ships, running around the yard and holding them over my head making whooshing noises.  If they broke they let off a strange smelling gas that made me dizzy.

This pen has soul.  Character, it had a previous incarnation, a lonesome history, there is hard evidence it was somebody’s darling before it was mine.  Or maybe it was never anyone’s darling.  Maybe it was partnered with a dull woman who had no love of words or the stroke of black on white linen paper.  Maybe it was loved, but it doesn’t look loved to me.  It’s too perfect.  Things that are well loved are usually damaged and repaired, often badly.  This is a pen that has not been gripped fiercely, never been thrown across the room.  Were you loved Ruth Schuldt? I don’t want to believe you were never opened up, parted, uncapped and bared to the naked golden nib, never stuffed and filled with the dark wet of life.