Unfortunately, most of the reading I've done lately has been student essays, interspersed with articles in The Times Literary Supplement, The New Yorker, and BBC History, to which I subscribe. (I read these publications on the bus on my way to and from my teaching job.)

Serendipitously, my gay-male colleague Jes Battis (who also writes fantasy novels under the pen name "Bailey Cunningham" -- you should look him up) asked me at the beginning of the school year in September if I knew anything about a historical lesbian landowner named Anne Lister. I told him I had reviewed a drastically shortened version of her diaries for The Gay and Lesbian Review. Jes loaned me a thicker book about her, mostly in her own words, and asked if I would give a short talk about her in his class in the literature of the "long eighteenth century," which some historians stretch out from the "Glorious Revolution" of 1688 to the Reform Act of 1832. I promised I would.

Meanwhile, here is my review. 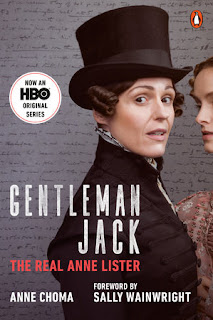 Everyone who watches the Home Box Office channel knows that “Gentleman Jack” was a real-life English lesbian and landowner in the early 1800s, and the charismatic central character in a new television series. Anne Lister, born into the scientifically-minded family that eventually gave its name to Listerine antiseptic mouthwash, was also one of the great English diarists. In her introduction, Anne Choma explains:

“Apart from a few loose diary pages written as a child, and two later smaller exercise books, they [Anne Lister’s journals] amount in total to twenty-four major volumes – 7,600 pages, spanning from 1816 until her death in 1840. . . [n]ow recognised as a document of global significance by UNESCO [United Nations Educational, Scientific and Cultural Organization] for being one of the longest social commentaries ever written.”

This incredible set of documents gives the impression that Anne Lister was more “out” in society as a butch lesbian (by today’s standards) than she really was. Her less private journals were written in what she called “plain hand,” and record such mundane transactions as land deals, the hiring of servants, and the arrangement of journeys by carriage and ship. One-sixth of the material in her journals is written in “crypt hand,” a private code that she invented from algebra and the Greek alphabet, and which apparently was intended for her own satisfaction, never to be read by anyone else.

In the 1890s, the secret code was deciphered by the male heir of the Lister estate, who kept the journals private for understandable reasons. The complete set was rediscovered by a woman scholar, Helena Whitbread, in the 1980s. Whitbread transcribed them and got them published in three volumes: I Know My Own Heart, No Priest But Love, and The Secret Diaries of Anne Lister. These books are the basis of the television series. Almost 180 years after Anne Lister’s death, the public at large can now find out how many women Miss Lister “grubbled” (had intimate physical contact with), and even how many orgasms she had while masturbating.

Gentleman Jack, the book under discussion, is the tip of an iceberg, and it was written to accompany the HBO series, directed by Sally Wainwright. Suranne Jones, the actor who plays Anne Lister, gazes at the reader from the cover of the book as though she were about to say, “Don’t you know it’s rude to stare?” She wears a gentleman’s hat, cravat, and greatcoat, but her features and tight side-curls show that she is female.

Anne Choma and Sally Wainwright have smoothly condensed a huge amount of material into a fast-paced biography, aimed at modern readers who lack the patience to slog through the originals. Choma and Wainwright provide many paragraph-sized excerpts, connected by fluid explanations.

The drama of Miss Lister’s love affairs is an interesting story in itself. Sent to private school at age fourteen, young Anne already seems to have had a fearless, butch identity. She had her first sexual affair with a fellow-student, Eliza Raine, and was asked to leave the school because of her distracting effect on the other girls. This didn’t stop Anne from educating herself in a wide variety of subjects, but Eliza was eventually confined to a mental asylum. How much this outcome had to do with family pressure or internalized homophobia is not clear.

At age twenty-three, Miss Lister began an affair with a new love, Mariana Belcombe. Three years later, Mariana married a wealthy landowner, and Anne confided in her journal that this betrayal broke her heart. However, Mariana continued to correspond with Anne for the rest of her life. It seems as if Mariana never lost hope that she could eventually go back to Anne, especially after Mariana’s husband showed his true colors as a gambler and womanizer. (Divorce, however, seems to have been out of the question.)

As the heir to an estate in Yorkshire, Anne Lister moved in upper middle-class circles, supported Conservative political candidates and values, and cultivated friends among the titled aristocracy. Apparently her reputation as “an oddity” (her own word) didn’t keep her off any guest lists. She seems to have been largely accepted on her own terms, although her romantic relationships with women were probably not assumed to be sexual.

Eventually, and after much hesitation from the current target of her affection, Anne Lister persuaded a local heiress, Ann Walker, to move into Shibden Hall, the Lister family seat, and the two women were together until Anne Lister’s death on a trip to Russia. Although she only lived to the age of 49, her life-story is more satisfying than fiction.