The set is only available on Amazon 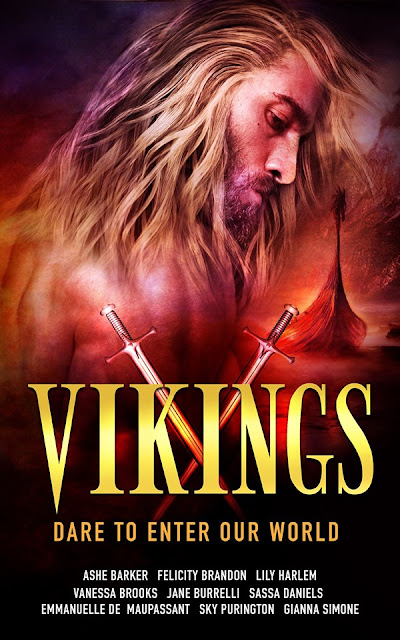 We’ve sworn our protection
Sworn to defend them in this savage wilderness
We’ll show them what it means to be loved by a Viking
What it means to be pleasured in a warrior’s bed
We are their masters, but only they can tame us
Can raging storms of fear and passion transform into enduring devotion?

DARE TO ENTER OUR WORLD

Filled with action and suspense, this summer’s hottest beach read comes in the shape of Vikings!

Battle-hardened and broad-chested, with arms strong enough to sweep you off your feet, these warriors are pure muscle, with shoulders built for carrying you to bed.

A tiny Scottish settlement at the mercy of its enemies.
A harrowing bargain struck for nine fearful and reluctant brides.

Delivered into Viking hands, the brides of Achnaryrie now belong to their conquering masters but, as wedding nights bring surrender to duty, will fierce lovers also surrender their hearts?

The Highland wilderness is savage, life is perilous, and the future uncertain, but each Viking has sworn protection, and there are no lengths to which a man will not go to safeguard the woman he loves.

Against the forbidding backdrop of medieval Scotland, join these indomitable heroes and intrepid heroines as they discover that the raging storms of fear and passion can transform into enduring devotion.

And a snippet from the Prologue (which I wrote)

Bewildered, anguished, Eithne stumbled from their cottage. The village was already deserted, eerily silent but for the cry of seabirds as they swooped over the nearby cliffs. Gathering up the skirts of her tunic, Eithne ran to the edge of the clearing from where she could gain a view of the sea below. Her heart lurched at the sight of three longships, in full sail, skimming the waves as they headed straight for the inlet closest to Achnaryrie. There could be no mistaking their destination, nor their murderous intent.


Each vessel thronged with men. She estimated perhaps forty in total. All would be hardened, fierce warriors, bloodthirsty, ready to slaughter, to maim, to rape and to destroy. She had heard the tales. She knew full well the savage ferocity of these Nordic raiders. Their reputation went before them.
The Vikings were merciless, murdering barbarians. And they were here.
With a despairing sob, Eithne turned from the sight below. She could still run, might be able to make it into the depths of the forest before the first of the raiders reached the village. She had perhaps a few minutes…
“We will fight them. Let them come. I shall be ready.”
Eithne started. Her sister by marriage had appeared from nowhere but now dashed to her side. Despite the hopelessness of their situation, she could not help but admire Rhiannon’s courage and determination. Clad in a leather tunic and wool trousers, and wearing knee-length boots, Rhiannon was dressed for battle. She held Alpin’s sword, the weapon raised and ready.
“It is no good,” Eithne attempted to reason with the headstrong young woman. “There are at least two score of them…”
“So we should simply surrender? Allow them to steal what is ours?”
“Of course not, but—”
“Or do you prefer to turn and flee as the rest have already done?”
“No, but I do not see—”
“Then what else is there? What else can we do? We surrender, or we flee, or we stand and fight. I prefer to fight.”
“Rhiannon…”
“So, do you have a better plan?”
“I… I suggest we…”
Rhiannon brandished her sword at an enemy she could not yet see. “Better to die on our feet, fighting to defend what is ours.”
“No.” Eithne tilted her chin up. Determination and dire hopelessness lent her courage and clarity. “I care not for any of those solutions. We shall not surrender, nor shall we flee. I do not doubt your skill or your courage, but this is an unequal contest, and we cannot win. To take up arms against men such as them would lead to certain death.”
“Better to die with honour—”
“Better still not to die at all. I have another idea. We shall negotiate.”
Rhiannon gaped at her. “Are you quite mad? You would have more success seeking to bargain with a wildcat, or that wolf which Ailsa insists upon keeping.”
“They are men, not animals. They will listen to reason.”
“That is a matter of opinion. I still say—”
“For once, Rhiannon, please, just do as you are told. Put down that weapon and go hide with the others. I shall go and speak with these…these…Norsemen.”
“You are bent on this madness?”
“It is the only way…”
“Then, if you insist upon facing them, I shall be at your side. I consider this a foolhardy notion, but I will not let you go alone.”
Despite Rhiannon’s belligerent tone, Eithne had never been more pleased to have her at her side. Theirs was not an easy relationship, it never had been, but Eithne loved her sister by marriage and was proud of her courage. “Ah, my sister. I see your father in you, and your brother. I shall be glad to have you with me, but by all that is holy, you must keep quiet and let me do the talking.” Eithne turned and dashed towards the path leading down into the narrow cove where the Vikings’ ships already swooped in towards the beach. “And put that damned sword away before someone gets hurt.”
“You are muttering to yourself. What are you saying?” Rhiannon scrambled behind Eithne down the cliff path.
“I am trying to recall a few words of Norse. There were Nordic settlers close to my childhood home on Orkney, and I picked up a few phrases. I thought if I were to greet them cordially…”
“You imagine you might resolve this situation by wishing them a pleasant morning and discussing the weather?”
Eithne did not blame Rhiannon for being incredulous. She could barely believe it herself. But if words were to be her weapons, she would do her best to assemble the best ones.
They emerged from the path onto the sand and shingle, at the same instant that the leading dragon ship swept onto the beach. Already the first of the warriors were leaping over the sides into the surf, wading ashore.
“Wait here,” Eithne commanded. “And say nothing.”
She stepped forward. Alone.