The Joy of a 'Real' Book

As an author, particularly an erotic author, I bless the advent of the ebook and e-reader. Not only do we have instant access to any book we purchase online, but we can read discreetly, on the train, the bus, in church. Well, perhaps not in church since I never go, but you take my meaning. No longer do we have to avoid eye contact with the spotty youth in the bookstore when we purchase smutty bodice-rippers with lurid titles and bare-chested, hunky covers. No longer do we need to crunch up the spines of our precious reading material in an attempt to conceal said cover from fellow travellers on the daily commute with, we assume, more delicate sensibilities than our own.

My kindle is a God-send, I take it with me all over. It is discreet, anonymous, inoffensive.

But it also lacks character. It is colourless, its very sameness which I value so highly is also its major flaw. So many avid readers will say they love the feel of a book in their hands, adore the smell of a new book, the pristine neatness of the pages, the crisp shape, the unique cover.

And I agree. You can track your progress in a ‘real’ book, see how much you’ve read and how much is still to go. You can, should you be so moved, read ahead or even peep at the final page. Your book is your oyster, or something along those lines.

Reading on a kindle is practical and efficient but holding a real book in your hands and turning the crisp, new  pages one by one is a luxury.

About a year ago I became involved in running the local library in my village. It had been run by a team of volunteers for a while already, but the original heroes and heroines who saved it from closure had become a bit tired and wanted out. Rather than let our village library go the way of so many other local amenities over the years, the parish council stepped in and took it on. I’m a member of the parish council so I stuck my hand in the air and was committed.

Every Monday morning I go and open up the library. I mess about with the date stamp to set it correctly (well, sometimes it’s correct), I log on to the big municipal library computer system, and the doors are open to the public. I wouldn’t say they come in droves, but there is a steady trickle of people who, like me, enjoy reading real books. 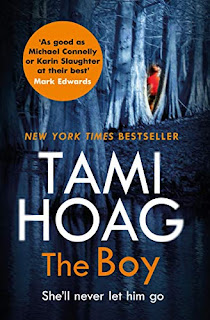 Surrounded as I am every Monday with shelves and shelves full of books, it would be rude not to browse. Tami Hoag goes down well and is one of my personal favourites. Has been for years. My most recent read of hers was The Boy, a murder mystery set in the Cajun region of Louisiana. Amid a backdrop of isolated bayous a seven year old boy is murdered in his own home. His single mother is badly injured trying to save him but is herself under suspicion as the secrets of her past are exposed. The detectives determined to solve the riddle of this little boy’s cruel death scratch deeper and deeper to discover family secrets, murky pasts, and the violence which simmers just beneath the surface of respectability.


In the sleepy Lousiana town of Bayou Breaux, a mother runs to her neighbour - bloody and hysterical. The police arrive to find Genevieve Gauthier cradling her seven-year-old son in her arms as he bleeds to death.
Detective Nick Fourcade finds no evidence of a break-in. His partner Detective Annie Broussard is troubled by parts of Genevieve's story that don't make sense. Twenty four hours later teenager Nora Florette is reported missing. Local parents fear a maniac is preying on their children, and demand answers from the police.
Fourcade and Broussard discover something shocking about Genevieve's past. She is both victim and the accused; a grieving mother and a woman with a deadly secret. Could she have something to do with the disappearance of teenager Nora Florette?
If you're already a fan you'll love THE BOY. If you haven't read a Tami Hoag book yet: now is the perfect time to start. 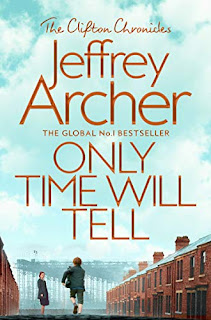 Another glorious advantage of the local library is the access it offers to all the books in the entire city system. Just as Kindle Unlimited panders to ebook bingers, the reservations system does much the same for lovers of paperbacks. A few weeks ago I binged my way through Jeffrey Archer’s The Clifton Chronicles, all seven books relating the twists and turns in the lifetime of Harry Clifton, born just after the end of the First World War into a poor family of dockworkers, who manages, largely through the tireless efforts of his mother, a young widow, who secures for him the education he deserves despite her own illiteracy, to become a hugely successful author. On the way he is acclaimed a war hero, gets convicted for a murder he didn’t commit, and does occasional little services for Her Majesty’s government when they find themselves in a tight spot.

Here is an excerpt from the blurb.

Ambitious and addictive, Only Time Will Tell is the first novel in international bestseller Jeffrey Archer’s the Clifton Chronicles begins the epic tale of Harry Clifton, a working-class boy from the docks of Bristol. .


Richly imagined and populated with remarkable characters, the Clifton Chronicles will take you on a powerful journey, bringing to life one hundred years of family history in a story neither you, nor Harry, could ever have dreamt of.

I have little sympathy with Mr Archer’s politics, but he spins a good yarn and is one of the finest story-tellers I have ever read.