I have to say, I am truly impressed by the depth of insight and variety of postings by my fellow bloggers. Wikipedia has a fascinating discussion about predation worth checking out - (does a Baleen whale eating millions of microscopic plankton really conjure up scary images of a predator?)

Today being Friday i thought i would simply list a few of the more famous predators. 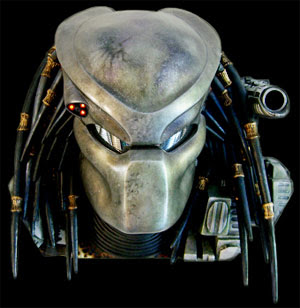 Remember this guy? The original predator movie was all guts and gore as this bad mamma jamma made his way around the forest maiming and hanging up his prey to "cure". The scary part was he could virtually disappear at a moments notice so you never knew quite where the attack was coming from. 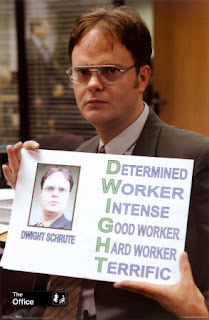 Then there is Dwight from the office. In one episode he is asked to pick a new health care plan, a task which he approaches with glee. He reveals his predator status by cutting the plan down to the bare minimum and even issues this great line...

"In the wild there is no healthcare in the wild i fell broke my leg i can't run i can't hunt and a lion eats me and i am dead. Well i am not dead i am the lion Your dead."

No shortage of these little guys and gals running around every office and organization with their "kill or be killed" philosophy of life. 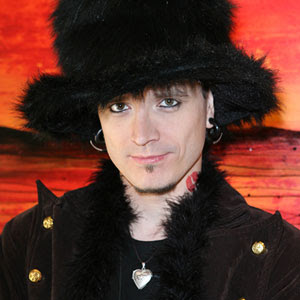 Next, the pick up artist. This guy's name is Mystery. He makes a living teaching guys the tricks of the trade for picking up girls in bars (as if the hat alone wouldn't be enough!). He uses a combination of NLP, wit, and disarming strategies to lure women under his spell and under his sheets!

In part, Mystery and others like him were born out of response to the female predator (we'll call her the "hey buy me a drink because I am hot even though I have no intention of paying attention to you once i have my vodka cranberry" predator - HBMADBIAHETIHNIOPATYOIHMVC for short! Ha!) These girls use tight skirts and flirty eyes to lure guys in only to leave them standing there holding nothing but a big bar tab.

Guy or gal they make the whole meeting great people that you might enjoy getting to know thing a little precarious.

At the end of the day, we probably all have a little bit of predator in us. Call it what you want... the will to survive, animal instinct, pride... Maybe one of life's biggest struggles is learning how to resist either role, predator or prey...
Posted by Daren at 5:46 AM