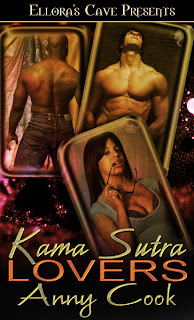 That’s the way it was supposed to be. But somebody is trying to kill them so they’re on the run, forced to fit their honeymoon in stolen moments while fighting off the Assassin’s Guild, carnivorous spiders and piecing together the puzzle of why their tri-marriage is under attack. Only by solving the mystery will they finally find their happily ever after.

With sudden determination, she pulled the pale yellow sundress over her head, shimmying until the folds fell into place. Her tight nipples poked at the material, obvious and excited. She paused for a moment to look around her room one last time. She didn’t plan to be a virgin when she returned. Her eyes lit on the bedside table with her secret stash of “just-in-case” condoms. Then she shook her head. No. She was willing to bet her trust money that her men were well prepared.

Slipping her sandals on, she sashayed out the door like a woman on a mission. She was going cock hunting and she planned to bag more than one.

The journey to the carriage house was both too long and too short. As she descended the wide curving stairs, trod the broad hallway gallery leading to the patio and crossed the beautifully manicured garden she had too much time to worry about whether they would reject her and too little time to consider what her options were in that case. The only conclusion she reached was that she wasn’t going to leave until she accomplished her primary mission. They would fuck her separately, together, standing on their heads—she didn’t care, but it was going to happen. Then she would deal with the aftermath.

When she reached Hart’s door, she took a deep steadying breath. Then another. You can do this, Giosetta. It’s what you’ve wanted for years. No chickening out now.

With a nod, she opened the door and entered the dark foyer. Three steps inside a brawny arm circled her, tugging her back against a wide bare chest at the same time as a broad palm covered her eyes. “Naughty, naughty girl. Didn’t anyone ever teach you to knock?” Arik growled in her ear. “Tchk. I think we’re going to have to spank you to teach you better manners.”

Giosetta whimpered and pressed her hips against the hard body at her back. His rigid cock poked between her legs as she instinctively widened her stance. Then Hart was standing in front of her, binding soft cloth over her eyes as Arik’s hand slid down to cup her breast. Hart’s hand cupped her other breast, tugging and toying with the nipple. His damp skin brushed her lips and his musky scent filled her with anticipation. His body crowded closer as Arik released her, capturing her wrists in his strong hands.

“Take her dress off,” Hart commanded gruffly before covering her mouth with his.

Clearly rejection wasn’t going to be a problem. What other delights they had in store for her remained to be seen. She trembled with anticipation as Arik slid his hands between her body and Hart’s. One hand slipped down over her mound and cupped her pussy. A thumb massaged her clit while he fisted Hart’s cock with his other hand.

Hart groaned and thrust forward in Arik’s strong grip. Then he raised his head and Giosetta could hear them kissing, pressing against her as their heads met over her shoulder. The tip of a thick finger slicked through the fluid slowly trickling from her pussy before gently entering that first inch inside her.

Bombarded by too many sensations, she rubbed her face against Hart’s chest before some age-old urge prompted her to bite him.

“Fuck! Do that again, Setta!” A deep growl rumbled in Hart’s chest as Giosetta licked and sucked his satiny skin before biting down again.

www.annycook.com
Posted by anny cook at 1:22 AM