The Grip crew would like to welcome author Cara Hart:

I’m not afraid to admit it. I’m tall, and I like my men taller than me. I prefer an older man – I had such crushes on guys who were seniors when I was a freshman in both high school and college. And Rob Crowe had the cutest curly hair I’d ever seen back in my first year of college. I nearly hyperventilated when he sat down next to me at the production of Loves Labours Lost in May that year. I must have blushed the whole time.

And call me a hypocrite, but I guess I’ve had my fair share of crushes on younger guys, too. I always felt a little silly when I got all hot and bothered over that baby. Even just a year younger and I felt like it was wrong. Crazy, I know, since my mom’s older than my dad. And several of my friends have married guys younger than them. They’re all happy as larks after robbing those cradles. I, on the other hand, still have my thing for older men. Not too old, of course. No daddy complexes here, but two or three years older is just about right.

The funny thing is, I’ve read some really great books where the heroine is older than the hero. Jo Beverley’s The Demon’s Mistress is one that comes to mind. It was published as part of a set, In Praise of Younger Men. And, hey, if Jo Bev can do it, it’s worth reading, if you’ll pardon my partiality towards those historical novels. Which obviously leads to a whole new set of complications. If the lady’s too old, the hero won’t be able to beget those heirs they’re all crazy for. And didn’t those historical heroes all wait until they were past their prime to marry, anyway? Are we just playing into the whole new cougar stereotype in the contemporary novels? But really, aren’t we just giving ourselves that equality we’re still lacking, despite all these centuries of proving women can do anything a man can do? Those old stereotypes ought to be going the way of the bodice-rippers.

My dad loves that old baseball movie – “If you build it, they will come.” (I like Kevin Costner, myself) Well, if you write it – and write it well – they will read. Guaranteed. I know I will. I’ll still be dreaming of that one perfect guy for me, single as I am. And maybe, just maybe...

He won’t have to be the older man.

A Love in Disguise 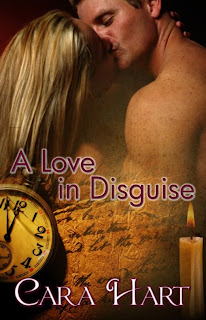 Blurb:
The Lady on the Run
The letter from her brother warned her of danger, but Kate Carteret is doubtful until she discovers her bedchamber in ruins. In the face of an unknown threat, she flees her home and finds sanctuary as companion to a family friend. Then Kate’s peace is shattered by the arrival of the Earl of Ashton, a man with a few secrets of his own.

The Gentleman Sent to Find Her
Though retired, James Meredith has unwillingly accepted one last mission for the Crown – locate a dead colleague’s sister, who may hold the key to the identity of a traitor. Her trail leads to the home of his cousin, a tiny village in the north of England. His aunt’s new companion, a middle-aged spinster, should be easily dismissed. Why can he not get her out of his head?

Both Searching for A LOVE IN DISGUISE

Excerpt:
“Disappeared, Your Grace? How could both of them be missing?” James Meredith, Earl of Ashton, leaned back in his chair facing the desk of the Duke of Foxborough and studied his grandfather’s aged face through narrowed eyes. “Carteret is one of your best men. Perhaps he’s simply late reporting to you and his sister went to visit friends.”

James always loved this room. The scent of old books and tobacco lingered in the air. Mahogany paneling and shelves stuffed with books and trinkets made the study of Foxborough House feel like a cave filled with treasures from distant lands. As a child, on visits with his mother’s father, the old man would gather James into his lap as he sat in the great leather chair behind the desk and spin wondrous tales of adventure and intrigue.

More recently, James had become the storyteller as he gave the duke reports of his whereabouts and missions. But today he was again the listener while his grandfather wove a tale.

“Without informing her staff? Do you know any woman who would simply leave her household with no information about her destination or return?” Incredulous, the duke shook his head. The leonine mane of hair was now an iron gray, rather than its original black. “You might, certainly, but the girl would never.”

James refused to believe the tale. “Could the man have turned traitor, then, and fled to safety with the girl?”

“Unlikely, lad. I knew Carteret better than his own sister did. The man was as loyal as they come.” The duke paused and sighed before continuing, his grief obvious. “No, he must be dead and I greatly fear the man who killed him abducted the girl as well.”

Foxborough leaned forward in his chair, determination written plainly on his countenance. “James, I realize you’ve lost your taste for this kind of activity.”

A bark of bitter laughter escaped James. “Lost my taste for clandestine killing? You jest. I never acquired a taste to lose.”

Abruptly, he stood and stalked to the window. He gazed out over the back garden of the Grosvenor Square mansion as he leaned against the sill. In a few weeks, the landscape would burst with the radiant color and sweet perfumes of daffodils, roses and camellias. A feast for the senses. But today, the sight of a bare winter garden did not help to soothe the bleakness in his heart.

“We have discussed this before, sir. I did my duty to the best of my ability. I consider that duty complete. I do not wish to rehash the issue. Again.” He infused his voice with finality and desperately hoped his grandfather would leave him in peace.

Foxborough rose from his chair and stood beside James. “Carteret’s last communiqué indicated he was close to discovering the traitor. He would rendezvous with another agent and continue here to report as soon as he completed the assignment.

“Word reached me he landed at Drakemouth, his usual debarkation point, and procured transportation, but I’ve no further information of his movements. He would have sent word to me if he was still alive. Whoever killed him will have confiscated and most likely destroyed whatever evidence he possessed.”

James moved to the small oak table between two towering bookshelves, poured himself a brandy and downed it. He needed the fortification against what his grandfather was about to say.

“Michael’s mission was to uncover the identity of a highly dangerous traitor. Information has been leaking over the Channel and much of it has come directly from this office. I’ve already put another agent in place to find Michael’s body and plans are in motion to send another to complete his mission. The disappearance of the man’s sister, however, creates something of a dilemma.

“I want you to locate the girl—Catherine. They were extremely close and she may have information we can use. The French may also appreciate her importance to Carteret. Locate her, find out what she knows and keep her safe.”

James sighed. He poured himself another drink, leaned his shoulder against the bookshelf and contemplated the glass in his hand. The amber liquor swirled, a small funnel appearing in the center. He felt himself being sucked into a similar whirlpool.

“You have other men, I believe, who could accomplish this task for you.” Taking a sip of his drink, James savored the flavor of fine brandy. How ironic that his grandfather fought so steadfastly for England, but refused to allow his cellars to suffer the loss of French wine. The liquid burned a path to his stomach as he swallowed, as though taunting him for hypocrisy.

“You are asking why I want you to complete this mission for me.” The canny old man studied James closely. “You are one of only three men I trust without reservation. The others are your cousins and they are already engaged in activities which preclude involvement in this matter. By default, you are the only man I can rely upon without hesitation to fulfill this request. Find the girl and protect her above all else.”

The worry in the old man’s eyes disturbed James. Never once in as long as he could remember had he seen such an expression mar Foxborough’s countenance. Even when James’ mother lay dying, the old man had displayed only sorrow and resignation.

Fear now twisted the duke’s strong features. There had to be a compelling reason behind this request.

“What is this girl’s importance to you?” James probed. “Why such an interest in her?”

“Carteret held a barony and his father was one of my first recruits. For that reason alone, I would be extremely concerned about her welfare. However, Michael also had the habit of writing letters to his sister in code. While innocuous in their appearance to her, they would be full of information for us. If he stayed true to form, he would have sent her a letter prior to his last discovery, containing information which may lead us to his killer.”

Check out A Love in DIsguise, coming November 4, 2008 from Resplendence Publishing:
www.Resplendencepublishing.com
Visit Cara on MySpace at: http://www.myspace.com/carahart71
Posted by Cindy Spencer Pape at 3:25 AM