The Gallery Comes Out Tomorrow!!! 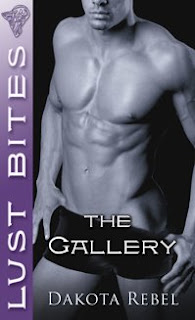 I cannot tell you how excited I am to finally be able to say that! It seems like I've been waiting forever for this one to come out. And tomorrow it will be available for everyone to read. Yay!

I was surprised at how easy the conversation felt with him. We fell into an easy report littered with sarcastic remarks and light, humorous banter. His wit was quick and he matched me dig for dig. It was nice to talk to a guy who didn’t get offended at my mouth. I cuss like a sailor and pass judgement on everyone with no explanation or remorse. A lot of men can’t handle that. But Conner took it all in stride. It was refreshing.

We passed on dessert so the waiter left the bill on the table while we finished our beers.

“So was your opening a smashing success?”

“It was, thank you. This city is full of assholes who couldn’t wait to, what was it? Start blowing smoke up my ass. I practically sold out opening night.”

“Great, then you can get the check.” I smiled sweetly, winking at him over my glass.

“It would serve you right if I went to the bathroom and never came back,” he said. “You had to order the chicken and the foi gras.”

“I was hungry. If I’d known you were going to bogart the steak tips I would have gotten the lobster too.”

He dropped his credit card on top of the check with a dramatic sigh. I laughed. I had been laughing all evening. I couldn’t remember spending such an amusing evening with anyone other than Hugh Grant, Ben and Jerry.

“What are you thinking about right now?”

“I was just wondering if Amanda was right, if I could really bounce a quarter off your ass?” When in doubt, sarcasm works in a pinch.

“Well, I usually don’t pull out the kinky stuff until the third date. But I suppose I could make an exception if you promise to still respect me in the morning.”

“That would imply that I respect you now.”

He smiled, dropping his eyes to the table. He covered my hands with his own causing me to let out a breath I hadn’t realized I was holding. His hand was warm and his skin was just as soft as it looked. It made me wonder about other parts of him, which made me blush.

“What are you thinking about now?” His voice was teasing, making me realize he had looked up at me in time to see the redness creep over my cheeks.

“Nothing you want to hear about.”

“I doubt that very much.”

The waiter brought the check back, saving me yet again from my awkwardness.

“Come on.” Conner dropped the pen on the table before taking my hand, leading me out of the restaurant.

“Where are we going?”

“Now?” It was going on ten pm and the gallery was long closed.

His hand tightened a little around mine, I squeezed back. I didn’t know what the hell I was doing, but I liked him touching me, I didn’t want him to stop. In fact, I found myself wanting him to touch me more, touch more of me.

As if reading my mind he pulled me against him and kissed me. It was soft, warm, and much too quick. My panties became instantly damp at the feel of him against me. I looked at him with wide eyes when he pulled back.

“There, now the first kiss is out of the way. We can both relax and have fun.” His logic was frustrating. I wasn’t sure if I wanted to hit him or make him kiss me again. Relaxing was now the least of the thoughts flying through my mind. “Let’s go see some art. If you can call it that.”

“Do you have a key?” I followed close behind him, one hand still in his and the other wrapped around his arm. His bicep was firm and flexed slightly as we walked.

“No, but all vampires are experts in breaking and entering. Greg won’t even know. Maybe while we’re there we can loot the safe and run away to Maui together.”

“Isn’t Maui a little…sunny for you?”

“Maybe a little. But wouldn’t you rather run off to Transylvania or something?”

“You know, just because you’re cute doesn’t mean you can throw racial slurs at me. I’m going to call the ACLU and report you if you’re not careful.”

“Be still my heart.”

XoXoXo
Dakota Rebel
Posted by Unknown at 3:54 AM