Since I've been selling since 1968, and I've moved a number of times, a number of spaces have been in my life so I'll share some of my favorite ones. Having a space in which to dream and write is important, but mine have always allowed the flow of family to enter. My children learned early that if Mom had a pen in her hand they should wait quietly until she looked up. Two of my writing spaces were successful but one was not and later I'll tell you why.

In 1968 when I sold my first short story, my space was a room about 8 by 10 lined completely in wood. I didn't have a desk but used a card table and a manual typewriter, complete with carbon paper and white-out tape. There was one book shelf that held mostly my writing supplies. Books were in another room. There have always been books around both for pleasure and for research. The space opened through a walk-through closet into the family room where my two young sons played and watched TV. My table was placed so I could see them, a very necessary thing since they were one and almost three. I haven't thought about this space for ages and remembering the eagerness when I sat down to type what I'd hand written brings that eagerness back. This space was in Pennsylvania.

We moved and the spaces changed, Two were in Ft. Worth. Texas. Neither of these resulted in sales but were learning spaces. An editor rejected a short story and stated that it sounded like a synopsis for a novel. This while in two Texas apartments. I honed my writing skills. One of the studies was in a hall with a desk. The other was in a room that was about fifteen by fifteen. They do things large in Texas. The room was both a writing space and a nursery for my infant daughter. By now the boys were seven and five. Here I wrote and re-wrote the first novel to sell. The book was rewritten seventeen times but didn't sell until I was in another Pennsylvania writing space.

My writing space here was an interesting spot. Situated between the kitchen and the living room, this wasn't exactly a room but a passage way. The steps to the basement were at the rear of my space. My desk sat beneath the window. The only wall without a door had a floor to ceiling bookcase where I had begun to collect my research material. Mostly medical and nursing magazines. My first books were "sweet" nurse romances. I sold three in 1972, one of them the book that was revised again and again. Revision was what helped me learn the craft of writing.

My next writing space was also in Pa. and this was the one that wasn't conducive to writing. The desk, actually a flush door with legs attached sat in front of a massive picture window giving me a vista on the world and too much to see and dream about. Here I wrote some poetry that was published but little else. Dreaming was too easy.

My current writing space is in New York, not far from the Hudson River but the only windows are small and look into the neighbor's kitchen and front porch. The space was once a sun porch that had been converted into a room by the former owner. When we first moved in I had the walls painted pale lavender with a dark purple carpet on the floor. For writing purple prose. Here I completed two more books and worked as a ghost writer for doctors and learned a lot about medicine and how I didn't like to write for doctors. Not all of them were bad and several gave me credit. That was a plus. But a return to work as a nurse to put four children through college interrupted my writing but not collecting ideas.

My writer's space is not pale green with a parquet floor. My computer desk has lots of shelves. On the top shelf are the sixteen dragons in my collection and some other sillies like a feather pen and a kohl stick from Egypt a bear dressed as a doctor and a small cat as a reminder of my familiar who passed away. Across the room is my recliner where I hand write all my stories. Above the chair is my fencing foil, a cane shaped like a serpent and a picture of Robespierre a cat who lives in several of my books. One wall is filled with research books and so is another bookcase. The children are grown and on their own, but the children of my mind live in my space and come out to show their stuff to the world.

Here's a taste of Flight, Book One of The Henge Betrayed by Janet Lane Walters
available now from Mundania Press
(Click the cover to find out more) 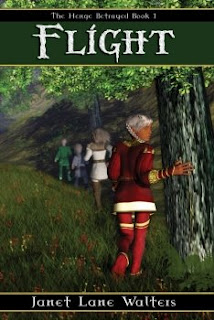 Blurb: Awakened late at night, four teens are sent by their parents to seek teachers to show them how to use their awakening powers. They have affinities for the elements, Earth, Fire, Water and Air. As they leave the henge, they witness the destruction of their home and family. Can they find their teachers before the mage, Dom Senet, He Who Walks With Evil, finds them?

Excerpt:
Flight - Book One of The Henge Betrayed by Janet Lane Walters published by Mundania Press

A flash of lightning brightened the sleeping chamber. Ash woke with a start and burrowed into the pillows. The scent of trouble rode the air currents that threaded through the open window slats. Her heart thudded in her chest. Like the beating of a giant’s club against a massive drum, thunder sounded. Again, lightning flashed and cast green, red, white and blue slashes across the sky.

The air held no threat of rain. ‘Twas like the heat storms of summer, unnatural at this time of year for the waning days of autumn marked the season.

Ash calmed her racing thoughts and tasted the air for that was her element. A frown formed within and without. From the land beyond the four walls of the henge, she caught the odors of fires, animals and men. From inside the keep, there was little except the aromas of her parents and siblings. Something was wrong. Where were those who served the Dom and Doma of Wesren? Ash propped herself against the pillows. If she had her younger brother’s affinity for things of earth, she could read the stones of the ancient tower and know what had passed while she slept. Where were the men servants and maids? ‘Twas as though the henge had been abandoned by those who lived within the four walls.

The Doma Calanda slipped across the room and sat on the bed. “Ashlea, still your thoughts.”

Ash struggled to obey the sharp command. Her mother seldom spoke this way. “Why?”

“Thoughts travel on the wind and may be read by those who wish us ill.” She grasped Ash’s hand. “Dress in your warmest clothes. As soon as you’ve finished, go to the inner room.”

The urgency in her mother’s voice raised fear. “What’s happening?”

“We’ve been betrayed. An army surrounds the henge. Your father and I believe the secret of the openings in the walls is known by those who seek to force us to use our powers for their ends.”

Click the book cover for more, or go look for the book on Amazon.com or Barnes & Noble.

Posted by Cindy Spencer Pape at 5:40 AM