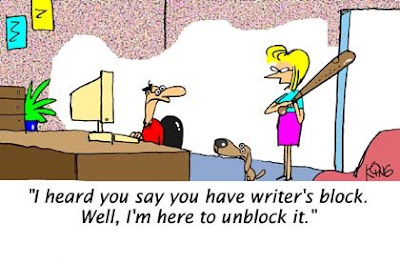 My muse is a man. He never tells me what I need to know until after the fact. And he’s annoying. And he likes to vacation in Europe while I’m in the middle of writing a book. He’s fond of whispering sweet nothings in my ear while I’m drifting off to sleep or giving me the key turning point in my story while I’m in the shower. I’d fire him, but somehow, he gets the job done.

He likes water. He talks while I swim or I’m in the whirlpool. He speaks in the rain and have I mentioned the shower? If I’m really, really stuck on a story, you might find me heading for a long, hot shower in the middle of the afternoon.

He adores music. I listen and he send movies through my head. We like to drive and plot. I’ve learned to take notes with one hand while I guide the car through traffic with the other. I’m good at writing without looking at the paper.

Music. I write to it. The muse has picked a soundtrack for every book and it’s part of my manuscript prep work. There are some songs that are basic to every book I write. I have various versions of Hallelujah that make it onto every soundtrack (think Rufus Wainwright’s version in Shrek). This Year’s Love by David Gray is essential. Lullaby by the Dixie Chicks. In My Heaven the Bo Bice version. Breath and Diary of Jane by Breaking Benjamin. Music invokes mood. I carefully choose each song to match the emotion of what I’m writing. The muse likes that. It’s his crutch.

But sometimes I take that crutch away. When the muse refuses to speak, I refuse to let him have music or sound. You might be amazed by how quickly answers come after five minutes driving in a totally silent car.

I’m not insane. I don’t really think there is some guy who follows me around whispering into my ear—wouldn’t that be nice? And annoying. But there are ways to trick the brain. I know my brain’s triggers. As a writer, I think that’s one of the most important things to learn. What and where are the circumstances that allow your creativity to flow? Is there certain music? Are there certain pictures to look at? A particular scent? A particular place? A particular format (paper versus computer)? Do you need to be alone or can you write with people around?

Take away his music until he speaks.
Posted by Brynn Paulin at 8:59 AM