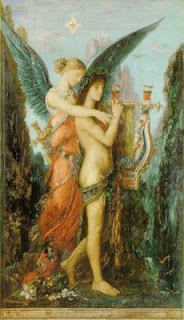 Note: I wrote this for another blog, early this year. However, it expresses my thoughts on the creative process so perfectly that I hope you'll forgive my recycling it.
You've just finished a story, and you know it's good.

You're on top of the world. The muses have been cooperative. You're in the groove.

There's nothing like it, except perhaps waking up after having spent the night having mind-blowing, life-altering sex. You're smiling to yourself, every time you remember. Perhaps various body parts ache or sting or tingle, reminding you just how fabulous it felt while it was happening. Perhaps you blush a bit, recalling the outrageous scenes that you spun out of your imagination. Who could have imagined that you'd be so brave and so bold?

All day long, you walk around like you have a secret. People may look at you oddly, but you don't care. You're still basking in the glow, feeling the energy sizzling through your body. You grin back at strangers, a bit goofy, drunk on the after-effects of inspiration. I just finished writing a dynamite story, a story that would curl your toes, if you only could read it, if you only knew how good it was...

Times like this make it all worthwhile. Because all too often, writing is just plain hard work. I want the story to flow effortlessly and inevitably toward a conclusion that will wring gasps or tears from my readers. In reality, though, I hack away at the paragraphs, writing and rewriting, seeking the elusive image, struggling to keep track of the details. Were the heroine's eyes blue or green in Chapter One? How did the hero get from the window to the bed without anyone noticing? Where was the gun when they were kissing?

Sometimes the words feel like huge, unwieldy boulders that I haul around, arranging and rearranging, trying to build something beautiful and true. Sometimes making my way through the twists and turns of the plot recalls the Prince in Sleeping Beauty, slashing through the forest of poisonous thorns in order to claim his beloved.

Then there are the times when I'm just plain sick of reading what I write. Don't tell me I've slipped and used that same tired old phrase yet again! Didn't my protagonist have an orgasm like a hurricane in the last scene? Why do my characters talk like they're in some "English for tourists" guide? When did that paragraph degenerate from "lyrical" to "overwritten"? Why would anyone want to read this stale, unoriginal crap, anyway?

Actually, I think that the key to being successful as a writer may lie in the ability to ignore all that snarky self-criticism and just keep on writing, building the word count, reminding yourself that you'll have a chance to improve it all later.

Still, if writing were always an effort, a job, probably I wouldn't continue. It's the delicious and relatively rare experience of inspiration that's the payoff. The exhilaration of having the words flow from my mind to the page without conscious planning. The heady sense of control as I craft sentence after sentence, knowing that each one says exactly what I intend. The sudden "Aha!" as I see how to foreshadow an ominous climax or tie an image back to a previous one, how to use symbolism or metaphor, not as an empty structural conceit but as an organic element in a harmonious whole.

I'm drunk on my power over words. I'm high on creation. Afterward, I'm still shaking with excitement, but humbled and grateful, too, understanding that I've been given a precious gift.

I call it "the buzz", but really, it has much in common with a rare, perfect night of love, one of those nights when the physical and the spiritual are aligned and you have no alternative but to believe in magic.