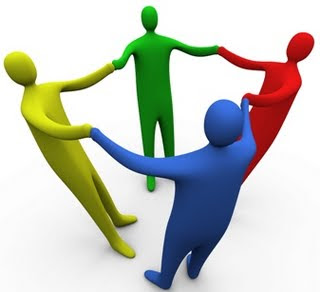 I've got a kid sister, five years younger than I am. She's the original extrovert. While I was a shy nerd in high school, with my nose buried in a book, she was Miss Popularity. I'm normally a bit afraid of people, feeling awkward and inadequate. In contrast, she has always had millions of friends,or so it seems. Even when she was a baby, she was outrageously friendly. We've got an old home movie of her at about 15 months, climbing out of her wading pool and wandering off, butt naked, to say hello to the construction workers who were installing a new sewer system on our street! We tease her about it now, but I think it was a signature moment, where she revealed the essence of her personality.

Sis (I'll call her Jane here) and I both take after my dad, but we received different gifts. She has his knack for talking to people and putting them at ease, and even more, for listening, making them feel as though they are the most important thing in her universe. I got his skill with words, the ability to sit down and write pages in the time it takes most folks to write a couple of paragraphs.

Jane has had several careers, but all have involved working with people. First she was an environmental educator. Then she moved into the hospitality field, where she served as director of human resources for a number of high-end hotels. I used to listen in awe to her horror stories about the problems she had to deal with in her HR role, human-relations conundrums that required a level of sensitivity, tact, patience and communicative skill that I knew I could never muster.

A few years ago Jane decided to quit the executive grind and start her own business as a personal coach and management consultant. I can't imagine anyone more perfectly suited to this sort of work. Running her own company after years of receiving a salary has been a bit scary for her, but she's doing really well. She knows how to convey important lessons through entertaining activities. She's lively, fun and very wise, too. Her clients rave about her team-building and training programs.

Every now and again she sends me a brochure, a newsletter, a web page or some other promotional text, for suggestions and editing. She's got excellent ideas, but occasionally she will use an incorrect word, or a clumsy sentence structure. She sometimes spells things wrong. I help as much as I can, trying to give her the benefit of my own gift so that she can make the most of her own.

It's difficult to imagine not being a skilled writer. I've been writing creatively since I was five or six, stories and poems and plays. In college and grad school I wrote term papers, journal articles and a 500 page dissertation. In my career as a software engineer, I've composed requirements and design specifications, user manuals, press releases and advertising copy. I've always been the person that could be relied on to sit through a three hour technical meeting and disseminate a set of detailed notes on the content and decisions a few hours later.

Of course, on top of the above, there's my fiction. I've penned six novels and at least fifty short stories in the last ten years. I'm not the most prolific author around, but I honestly can't complain. And to some extent, I take my verbal facility for granted.

If I couldn't write, I would be someone else. I would have a different life. It would affect every aspect of my existence, possibly even my sexuality. I'm not sure that I'd want that life, but if I were forced to swap my writing skill for some other gift, I think I'd ask for Jane's interpersonal abilities. I might even be able to convince myself that what she does with such ease is more significant than my scribbles.

People are more important than words. I have to remind myself of that, every time my husband interrupts me in the middle of a writing session. I'll admit I sometimes feel superior when I review Jane's prose, though she's far more literate than the average American. I'm ashamed of that reaction. Every day, Jane makes a difference in people's lives, helping them become happier and more effective. I don't know that I can honestly say that my writing has such a positive impact, though I'd like to believe that at least it does no harm.

The notion of giving up my ability to write is quite terrifying. But if I had to do so, I'd like to become more of a people person. I'd choose the gift of making people feel comfortable and valued, the way Jane so effortlessly does. She probably takes her ability for granted, too.