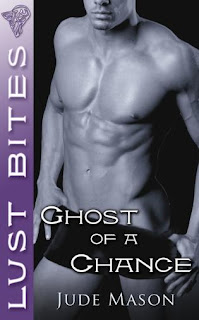 Ghost of a Chance

By Jude Mason
ISBN: 978-1-906811-06-8
Contains: m/m, paranormal
Publisher: Total E-Bound
Publisher URL: http://www.total-e-bound.com/
When a ghost appears in his dreams and gives Robert Haskins the blow job of his life, it also drops him into a forty-year-old mystery that he's determined to solve.

Robert shifted. Rolling onto his back, he stretched his legs out, barely conscious of being in bed, not really awake.

Wet suction pulled at his shaft. A tongue slid over the crown of his cock, the tip delving into the slit. His thighs eased open.

Yes, a dream. That’s what it is. A wet dream, a fantasy—a disembodied mouth, tongue, lips, teeth, all there just for his pleasure.

The suction eased, the lips barely skimming over his shaft—up and down, up and down. His hips twitched, his buttocks clenched, his thighs tightened. He splayed his knees wider. A tongue moved wetly up his shaft again. The sensation faded.

A face appeared—dark hair tousled, thick brows with one arched more then the other, sideburns longer than fashionable. The nose had a bump in the middle. Eyes—brown, wide open, framed with beautifully long lashes—watched him. Lips—thick, moist, kissable—opened.

Robert’s hips moved, churned his ass into the bed. Soft sheets brushed against his shaft and its head wept and stuck to the material.

He reached for himself. A squeeze, a tug. He sighed and his slumber again deepened.

The beautiful, handsome face vanished, but the mouth remained. Lips, tongue, brushed the thick dome of his cock.

His balls shifted, moving up closer to his body. He clenched his ass. In sync, his hips rose, pushing his cock shaft further in.

Taking his hand off his cock, he reached lower and cupped the soft, nearly hairless sac below. Holding it, he pulled down on the two walnut-sized orbs.

Okay, this may not be exactly what Lisabet meant when she came up with this weeks topic, but this opening came to mind right away.

Do I remember my dreams? Do they play a part in my work?

I have a notepad and pen beside my bed at all times. I don't remember many of my dreams but I can't even begin to count how many times I've woken up with a book completely formed in my thoughts. Not just a little flash of an idea, but the entire thing laid out and ready to go. I rarely manage to get it all down before it fades away. My first book was one of those dreams.

Mostly though, I'll answer questions or fix mistakes I'm making with characters in my sleep. What I mean is, a character, like any person, have things about them that are a given. If I write something that simply wouldn't fit the character, I've dreamed about it, them complaining, telling me I'm full of it for having them do whatever. I've been woken in the middle of the night to go fix these things.

Ya know, it's not just sleep type dreams that bring stories. Daydreaming is almost as productive. Possibly even more so because I don't have to spend time trying to wake up enough to find the damn pen. LOL I can be sitting looking out the window, mind wandering, and an idea, or a complete story will happen.

So, yup, dreams really do become part of my writing. Not always, because I've had some spooky dreams, but enough so I do keep that notepad handy.

What do you think about his topic? Do you remember your dreams well enough to write them down, or somehow use them?