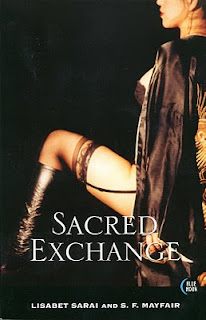 In 2003 S.F. Mayfair and I published an anthology called Sacred Exchange: Stories of Spirituality and Transcendence in Dominance and Submission. I'm very proud of that book, from both a literary and a thematic perspective. Some of the stories still take my breath away. To a remarkable extent, it accomplished what we had intended: to reveal, through fiction, the affinities between D/s and enlightenment, however the individual might define that term – to illustrate how one could be changed, elevated, refined and perfected by the experience of dominance or submission.

Alas, the book was a commercial flop. It never earned out its advance (most of which went to pay the contributors in any case.) Although published by veteran erotica imprint Blue Moon, the collection was (I believe) insufficiently salacious to attract an enthusiastic readership (despite the fact that many of the tales are graphic and a few would qualify as extreme). It went out of print quickly, leaving me with a couple of dozen author copies and a slightly wounded sense of that all our work was not appreciated.

Now, seven years later, I'm thinking of resurrecting the book and reissuing it as a charitable anthology through Alessia Brio's Coming Together imprint. I'd really love to give the book a second lease on life. I'm far more familiar with the erotica market than I was back in 2003, when I was a lucky, wide-eyed amateur. I have a lot more connections. And I think that I can get at least some readers' attention, especially if the book benefits a worthy cause like Doctors Without Borders.

There's only one problem. I can't find the digital manuscript.

This is so embarrassing! I'm a software engineer and I live with a guy who's got years of experience as a system administrator and who is a fanatic about backups. It's true that I've moved to the other side of the world since I submitted the book, but we still have archives of material from our computers that are considerably older.

I do have a directory in my writing drive called “anthology” and sure enough it has material related to Sacred Exchange: form letters to authors, critiques, a spreadsheet that Seneca and I used to keep track of our evaluations of stories, and yes, a zip file of stories in plain text. However, as far as I can tell, these are not the final, edited versions, but rather, the stories more or less as submitted, including many that we didn't accept. Furthermore, we spent a great deal of time working with some of the authors to polish their contributions. All that work is, apparently, gone.

What must have happened is that I must have voluntarily deleted the full manuscript, thinking that I didn't need it. (In those days I was always tight on disk space.) Maybe I thought that the stories zip file included the finished versions. Maybe, innocent that I was, I figured that once the book was published, I didn't need the manuscript file any more. You'd think that I'd have a backup somewhere, and maybe one does exist, but I sure as heck can't find it. The book was published during the period when we were selling our house and preparing for our international move, so our backup infrastructure was probably far less sophisticated and complete than it is now.

So now, if I want to continue with this project, what are my options? I could start with the raw submitted tales and re-edit them with the finished book in hand. Or I could slice the binding off one of my author copies, and try to scan and OCR the pages, then edit carefully to fix the inevitable errors. Either way, it's going to be a major task. Do I want to undertake it just to soothe my pride and maybe make some money for charity?

I'm still pondering this question. And I'm kicking myself for having so little foresight. This isn't typical of me. There have been very few times in my life when I've had to start from scratch – even now, I'm not actually at ground zero, since I do have the printed book as a reference. I'm determined that from now on, I'm going to have good, accessible backups of every file I might need.

Of course, I thought that I already did!