As you can see, my writing hasn't changed all that much...

A conversation in the comments of a 2013 post here at OGG got me searching for a book I wrote when I was nine.

Back then, I was all about the fan fiction. Usually I wrote stories about cartoon characters. Sometimes I'd rip off of a Quebecois children's series called "Sophie, l'apprentie sorcière" (written by Henriette Major, published by Editions Héritage).  I loved these middle-grade books about a funny tomboyish witch-in-training, when I was a kid, but you can't get them anymore, as far as I can tell.

This is your lucky day, because you're about to read some of the earliest Giselle Renarde writing in existence.


It was the first day of June. Hervé (I don't remember who he was--their teacher?) told us we had to do a play, but not just a little skit, it had to be exciting.

"I know which play we should do: Pretty Woman," said Antoine.  (umm... A. not a play and B. not appropriate for nine-year-olds)

"YES, I KNOW SOPHIE!" said Antoine. (you know Sophie? or you know, Sophie?)

"Tomorrow is Saturday. We can go see the film," said Chantal.

The next day they went to see the film. Sophie's gang rehearses the play. When they return to school, Hervé wants to see the play. (look at his big nose. haha) 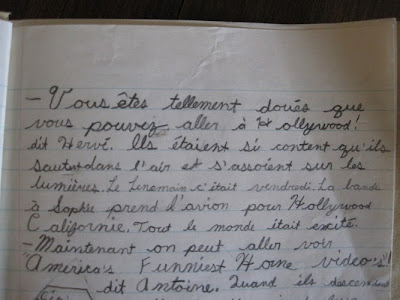 "You guys are so gifted that you could go to Hollywood!" said Hervé.

They were so happy that they jumped in the air and sat on the light fixtures.

The next day was Friday. (wow, they lost a whole week) Sophie's gang took a plane to Hollywood, California. They were all excited.


When they get off the plane, they see their names in lights: "Chantal Rose, Sophie Cooper, and her friend Antoine in Pretty Woman." (i guess they're IN the movie now) They all go to the mall.  (can you tell I grew up in the burbs?)

"Sophie, we can change our name to the Pretty Woman gang," said Antoine.

"That's a great idea," said Sophie. (no, she would have punched him for questioning her authority)

"We have lots of money. We can live in Hollywood," said Chantal.

The next day they went to San Francisco to see Bob Saget. (HA!) They had... (ooh the suspense is killing me...)

(Well, that's it.  I'm sorry there's not more because I'm pretty sure I peaked in Grade 3. The end.)