There is so much to say on this topic that I hardly know where to start.

At one time, I didn’t think it was possible to write explicit sex scenes in the style of some past era. I probably believed that sex hadn’t been discovered before the time of my parents’ courtship (WW2, hubba-hubba). Then I read The Mammoth Book of Historical Erotica, edited by Maxim Yakubowski (circa 1999). Those stories were both hot and realistic, and some were set in times and places before the Christian Era.

I wanted to write that stuff, but I wasn’t sure I could.

A lot of popular historical art that has been produced since 1980, approximately, manages to produce the flavor of a past era, but with full use of current technology and the relative freedom of a culture that isn’t dominated by a Church or an all-powerful Emperor. Historical movies that fit that description include the painterly films The French Lieutenant’s Woman (with a kind of Victorian palette) and Goya in Bourdeaux (which looks like the kind of film the Spanish painter Francisco Goya would have produced if video cameras had existed in the 1700s). Then there is Schindler’s List, set in the 1940s and shot in black-and-white, but with a crisper, clearer chiaroscuro than you can see in any movie actually made in that time.

Like Lisabet, I love the Victorian era (1830s-1900), though the Enlightenment and Romantic eras seem fun too (mid-1700s-1830s). I like the combination of a culture that is now far enough in the past to seem exotic, yet close enough to our time that the literature actually written in those days is still comprehensible. The language doesn’t need to be translated.

Shakespeare’s era (approximately 1590-1616) is a little more remote, but as Sacchi demonstrated, it’s still possible to write a story with a Shakespearean feel that doesn’t require pages of footnotes to be understood. (And on that note, William Shakespeare was born AND died on April 23. We can still drink to his memory a day late.)

Then there is the Renaissance and before that, the Middle Ages. Linguistically, 1100-1450 (more or less) was the era of Middle English, which definitely does not look or sound like modern English. Here is a famous passage (part of the Prologue of the Canterbury Tales, circa 1380s), which I can still recite from memory:

WHAN that Aprille with his shoures soote
The droghte of Marche hath perced to the roote,
And bathed every veyne in swich licour,
Of which vertu engendred is the flour;
Whan Zephirus eek with his swete breeth
Inspired hath in every holt and heeth
The tendre croppes, and the yonge sonne
Hath in the Ram his halfe cours y-ronne,
And smale fowles maken melodye,
That slepen al the night with open ye,
(So priketh hem nature in hir corages):
Than longen folk to goon on pilgrimages.

(There are many more lines, but these are the ones I remember.)

Anyone who wants to set a plot in an English-speaking environment before the mid-fifteenth century, and lure a non-scholarly 21st-century audience to read it, has to improvise a lot. 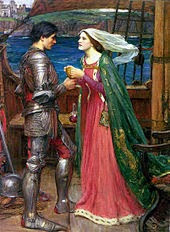 In order to write a story set in the universe of King Arthur (though technically, it’s about his conception), I reread my old copy of The Morte d’Arthur by Sir Thomas Mallory (mid-1400s).

Here is the beginning of my story:

My lord, the Duke of Cornwall, has accepted Christ Jesus as his savior for a score of years. As his lady, I have a duty to pray as he does before our people, whatever I believe in my heart. My lord’s honor deserves no less.

How different things were when the Maiden, the Mother and the Crone commanded us to follow our hearts. No man took offense if his lady held a paramour in her arms before the Beltane fires, nor would a good woman try to keep her wedded lord on a short tether throughout life. I remember a time when love was not confined, but I was a little maid who barely understood it. I was simply Igraine then, and I was too merry to be wise.

Now I wait alone behind the thick stone walls of Castle Tintagel for news of my lord Cornwall, and of the King that I love beyond measure. They plan each other’s destruction, and I fear for them both.

I’ve written elsewhere about the challenges of writing this story. The editor to whom I sent it liked the style, but didn’t find the story sexy enough, even after I had revised it to give Igraine more, shall I say, physical ecstasy. Her emotional ambivalence (the King and the Duke are threatening to tear the kingdom apart over her – oh, for the love of all the saints!) seemed inherent in the original story. Whether this story will ever find a home remains to be seen. I might have to rewrite it as straight historical fiction, with much of the sex kept out of sight.

Since Annabeth was so flattering about The Flight of the Black Swan (set during the American Civil War, 1861-1865, and slightly beyond), I’ll introduce the narrator, Emily (represented in the audio version by a British actor, Catherine Carter). Here are her opening lines:

Almost the worst thing that can happen to a young lady is to be loved by her parents.

Consider it: attentive mothers and fathers do all in their power to protect their daughters from risk and notoriety—in short, from every experience which gives savor to life. Fortunately, I approached the age of majority with my most exciting memories of childhood intact. 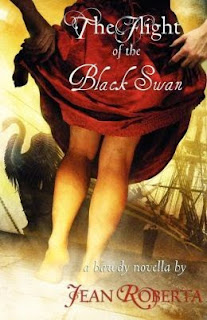 The book is available in several formats from Amazon and from the publisher, Lethe.

I would love to read a sexually-explicit version of the gothic novel Wuthering Heights (written in the 1840s, but with much backstory set in the late 1700s). Since a certain British publisher has been soliciting raunchy versions of the “classics” for several years, I suspect that someone more qualified than I will write it before I could finish the necessary research. But then, there are quite a few intense female-female relationships in the fiction of that era that would benefit from a clearly lesbian interpretation. :)