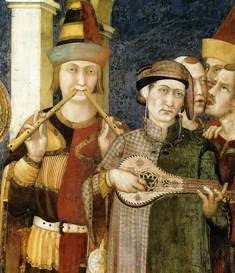 At the risk of taking up more of my fair share of space on this topic, I have something to add about the cultures of the past.

Before the invention of television, and especially before motion pictures and radio, most people created their own entertainment. This meant that music was once ubiquitous in every culture I have ever heard of. Look up a book on “folk music,” and you will find work chanties that were used to maintain rhythm among teams of men performing repetitive motions. You will find ballads of various kinds: the kind that were passed down within families, and the “broadside” versions that were quickly composed when someone was executed in public. You will find lullabies and love songs and laments and jokes in verse.

There is a reason why remarks about "playing the lute" when that instrument was popular (see the illustration) often included a double-entendre. (Wink wink, nudge nudge.)

Structured poetry and song lyrics are essentially the same thing, so musical cultures produced poetry on the page. Older novels nearly always include poems. (Does anyone remember that Frankenstein, Mary Shelley’s famous horror novel, first published in 1818, includes verses by the author’s husband?) Sir Walter Scott, a novelist who was widely popular in the nineteenth century but rarely read any more, included poetry in his work. Reading his books as a teenager, I could imagine his characters singing.

My teenage years saw the rise of The Hobbit and the Lord of the Rings novels by J.R.R. Tolkien, who had been known (if at all) as a medieval scholar before he was discovered in the 1960s as a fantasy writer. As one reviewer of the time pointed out, nearly all his characters (elves, dwarves, hobbits, magicians) sing, sometimes at length. (The orcs, who are evil to the core, seem to be the exception. Of course, they would be philistines with no rhythm.)

Several years ago, one of my students in a first-year university English class requested that we study the poem from Lord of the Rings that begins: “Earendil was a mariner/Who tarried in Arvernien.” The words almost sing on the page.

When each novel in the Lord of the Rings series was turned into a blockbuster movie, I was impressed. The plots, the characters, the cultures, the dialogue, even the terrain (filmed in New Zealand) all seemed faithful to the novels. But where was the music? It's there in the background, as in all Hollywood movies, but the characters don’t sing. Would their sagas have seemed too anachronistic in the current age? Were singers and musicians too hard to find?

As a reader of fiction written in the past, I am usually aware of the importance of song when I write historical stories. Alice in Wonderland (first published 1865) is largely a series of parodies by “Lewis Carroll” of poems by contemporaries, such as William Wordsworth. In my tribute story, “Becoming Alice,” Alice’s cat Dinah sings the following, a popular song in the fictional world of my story:

“When your bosom’s aflame/With desire beyond shame/To be fondled, embraced and hard-pressed,
When you’re mad as a goat/’Neath a starched petticoat,/And you wish to be wholly undressed,
Then you’re simply alive./You just need a good swive,/And to satisfy others as well.
No need to tut-tut./The whole world is in rut,/And you’d find no such pleasures in Hell.”*

In my ghost story, “Authentic” (set in a local historic building, the official residence of the first Lieutenant-Governor of Saskatchewan and his wife in 1905), the First Lady of a newly-formed Canadian province hints at her past love affair with a girlhood friend when she sings a song of her own composition, accompanying herself on the piano. The modern-day historical consultant who sees and hears her thinks Diana is a tour guide wearing the evening gown that the real Diana wore for her full-length oil portrait. As it turns out, Diana is a ghost who is capable of exchanging emails.

For better or worse, I can’t quote Diana’s song here because I don’t have a copy of it at home. (The story appears in Haunted Hearths and Sapphic Shades: Lesbian Ghost Stories from Lethe Press, 2008.)

For writers of historical fiction who feel that structured verse is either too hard to write or too cheesy to read, here is a scary fact: before the rise of the novel in the 1700s and before traveller’s tales of the 1600s, written narratives not only included poetry, they were poetry. Look up The Canterbury Tales (referred to in my last post), or a faithful version in modern English, and you will find that every story is told in rhymed couplets. Look for The Song of Roland (to learn about “courtly love”) and you will find verse after verse after verse. The same is true of Beowulf, a stirring hero story in Anglo-Saxon or Old English (spoken in England before the Norman Conquest of 1066). In my mother’s time, every university student who majored in English had to study Beowulf as a foundational work.

*”Becoming Alice” can be found in my single-author collection, The Princess and the Outlaw: Tales of the Torrid Past (Lethe) and in The Mammoth Book of Best New Erotica 13, ed. Maxim Jakubowski (Constable & Robinson).