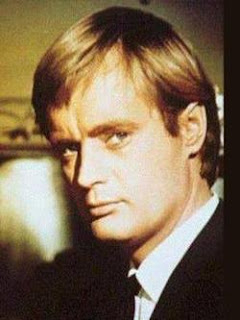 Our new member Charlotte Stein set the topic for this week: unconventional crushes. In response, I thought I'd go 'way back, practically before the dawn of history—okay, before color television at least!—and talk about one of the first crushes I remember . The intriguing thing about this crush is that it prefigured the sort of person I'd continue to be attracted to throughout my life.

In 1966 I was in ninth grade, thirteen years old, and madly in love with a guy on TV. The spy series “The Man from U.N.C.L.E” was hugely popular in those Cold War years. Each week super-agent Napoleon Solo from the United Network Command for Law and Enforcement matched mind and muscle with the evil minions of THRUSH (the Technological Hierarchy for the Removal of Undesirables and the Subjugation of Humanity) as they plotted world domination.

Solo had a lot in common with his contemporary James Bond (not all that surprising, considering the fact that Ian Fleming contributed to the development of the character). He was handsome, muscular, sophisticated, witty, and what would now be termed a chick-magnet. He was clearly the hero of the series—in fact the original title was “Solo”. But I wasn't in love with Napoleon Solo, despite his many positive attributes. The man I adored, whom I would do anything to meet, for whom I was ready to die, was his slender, brilliant, and enigmatic sidekick, Illya Nikovetch Kuryakin.

Except for the fact that he was blond, Illya Kuryakin was a classic example of what I now call the “dark poet” type. You never knew what the taciturn Russian was thinking, but there wasn't any doubt that it was deep. He evaded questions about his past but he was rumored to have Gypsy blood. He smiled far less often then his extrovert partner Solo. His motivations were normally obscure. Although Illya was an explosives expert and sharp-shooter, and excelled in practically every style of martial arts, his intelligence was his most potent weapon. According to Wikipedia, he earned a Masters degree from the Sorbonne and a PhD in quantum mechanics from the University of Cambridge. He played the bass viol, the English horn and guitar, and spoke French, German and Japanese (among other languages).

I truly had it bad for Illya. I had pictures of him on my wall. I dreamed about him. I recall that once I thought I saw David McCallum, the Scottish actor who portrayed Kuryakin, in a restaurant. My parents had to hold me down to stop me from rushing up to the poor guy (who was probably just a look-alike) , begging for his autograph or volunteering to have his children. Nevertheless, I harbored a secret excitement for days after that close encounter, as if he and I had managed a secret tryst.

“The Man from U.N.C.L.E.” was canceled in 1968. Eventually I outgrew my infatuation with the lithe, mysterious spy. But he was only the first of many dark poets to hook my heart.

You know the kind of guy I'm talking about? He's usually on the thin side, possibly because he spends his time in cafés or bars, drinking black coffee or straight vodka rather than eating. His hair tends to be long, maybe even scraggly. He might have a mustache. He's stronger than he looks, with a wiry power that makes your breath catch when he uses it.

He'll hold forth with astounding eloquence on philosophical issues like the nature of time or the question of whether one can truly understand another human being, but he's far less forthcoming about his own emotions. He fills notebooks with heart-piercing poems or incandescent prose. He stays up until four AM. He improvises the blues. He'll take you to bed and to the moon, give you pleasure so acute it brings tears to your eyes, but he'll never say he loves you.

I'm a sucker for that kind of guy—moody, creative, intelligent and intense. It's a pity, because they're often not particularly good with relationships. I've got pages of poems bemoaning the fact that you never know what this sort of man really feels, even while you're ready to surrender everything to be with him.

There's a kind of glamor to this type—Illya's type—glamor in the original sense of the word, a force to bewitch. Part of the attraction, I think, is the desire to break through those emotional walls. It's a kind of conceit: “I'm the one who loves him enough to make him open up.” We all had those fantasies about Mr. Spock, didn't we? (another crush, a similar type) I'm the one who sees beyond that Vulcan mask, the one woman who can evoke true, overwhelming emotion from the man who lives by logic. It's a potent aphrodisiac, an assumption of erotic power. Let me just bed him and he'll love me—he won't be able to shut himself off from me, his soul mate...

I've had several men who fit this mold as lovers. None of those attachments ended all that well. Fortunately the man that I married has little in common with Illya Kuryakin, at least on the emotional side, though he's easily as intelligent as the U.N.C.L.E. operative. My husband is cheerful, easy-going, relatively relaxed except when he's focused on his work. He loves me and doesn't hesitate to say so.

I've spent nearly thirty satisfying years with my honey. Nevertheless, I still dream, sometimes, about slender, intense men with prodigious intellect and Gypsy blood. Maybe, after all, I never did get over that crush.

Illya, mon amour, wherever you are—I still love you.