The reason I chose the topic of Unconventional Crushes for my first on the Grip is pretty simple. I love weirdos. Always have, always will. Even back in high school, while everyone was busying drooling over some boyband with interchangeable members, I was in love with Tim Curry.

Yeah. That Tim Curry. The one who plays transvestites and devils and killer clowns. 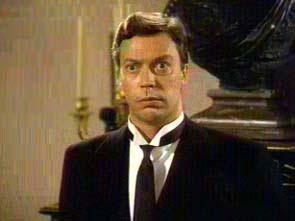 I know. Not much to fancy there, eh? I mean, just look at the frog eyes and the weird mouth and the general air of British stiff-upper-lippedness. None of that should be sexy. And yet it IS because he's awesome and I just want him to chase me around a manor house in the 1930s. Possibly while being repressed.

I think repression plays a big part in my lust for unconventional weirdos. For example, another high school love was Data. You know, the android- from Star Trek? The greeny-yellow one. The one who literally couldn't feel anything. My God, how I lusted after him! No surprise that I now lust after Spock, from the new Star Trek movie. He doesn't want to feel anything.

Unless it's my butt. I'm pretty sure he wants to feel my butt, when I'm busy frantically thinking about being trapped with him, in a Jeffrey's tube. The name Jeffrey's tube alone sounds like the most heavenly dirty thing in the world, so I'm pretty sure something would end up happening in there, despite the iron lock of emotional detachment that's probably wrapped around his penis.

But I digress. What was I talking about? Oh yeah- repression, and how it probably actually sucks in real life, but is totally orsum in my head. In my head, repression is one of the few barriers left in the modern world, between my heroines and their lust objects. Repression makes the flame of sexual tension roar, and lots of secret erections can occur, and everything is bad and naughty and wrong and oh.

Surely I can't be blamed, for liking weirdos?
Posted by Charlotte Stein aka The Mighty Viper at 7:00 AM