In the deep midwinter? 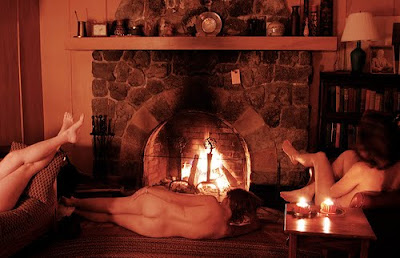 I’ve never been a great fan of winter. A September baby, born in North Yorkshire and probably spending my first weeks of life in chill, draughty married quarters may have put me off it. And I’m English, which means that winters are rarely – and then only briefly –spectacular. I like spectacular. (Weather, women and sex).

Shostakovitch winters. Four and five foot snowdrifts, a landscape that looks like the top of a beautifully iced cake, kids on sledges… I like all that. But normally it only lasts for days here, and then real winter sets in with its endless grey skies and equally interminable rain, windscreens misting over, and baptism by total immersion available to anyone who stands long enough by a puddle atthe roadside.

Odd that we seem to have little fog though. I remember fogs ‘oop North’ so thick you could imagine slicing chunks out of it.

And winter contains Christmas, now behind us, which is good or baddepe nding upon one’s mood at the time, but mostly bad. It’s an excuse to watch Alastair Sim in Scrooge again, and Cary Grant in The Bishop’s Wife – a peculiar favourite for an atheist since Grant plays an angel. My partner will want me to go shopping every day, instead of just every other day, and the crowds will be bigger and the tacky stuff will be so much tackier, because it always is, and the cats will get annoyed as usual because there’s all this lovely chasey stuff to play with but it’s all suspended from the ceiling where they can’t get at it.

January. Two faces, both of them pretty mean. Wet and cold. Only a short-ish stretch, though, for those of us in education before the end of the academic year and the long summer break. Now you’re talking.

I’ve been racking my brains to remember winter themed stories, or even winter-set stories, I’ve written, but I’m struggling. I did write an improbable tale, once, of a Wehrmacht officer and a wounded female Russian soldier getting it on in the middle of a Russian winter, but the less said about that the better I think. I tend to prefer sudden summer rains where attractive girls get all wet and see-through, nipples press darkly on wet fabric…. or summer itself, when girls who
avowedly ‘dress for themselves’ dress so delightfully for me.

I’d be willing to live the fantasy most people seem to dream of, of course, for the naked on the rug in front of the fire in an isolated chalet with the girl of my dreams, but I don’t think I could afford it and my partner wouldn’t approve.

Short days, long nights, snuggling warm in bed. The latter is fun, but I ache for the sunshine I guess. And it’s sunshine that appears most, I suspect in my writing. My ‘Aphrodite Overboard’ lived on a tropic isle, and had sex with pretty much everything that moved, and my Peter and Tom in ‘Islands’ – only a WIP as yet – are desert island dwellers too. Dear old Arnold, in ‘He Loves Me, He Loves Me Not’ loses his cherry beside a sunny millpond, the naked ‘bunny’ girls of ‘La Chasse des Lapins’ disport themselves in a sunny garden, and so it goes on.

So the best part of the Deep Midwinter, it seems to me, is the looking forward to the sunshine to come.