You know those people who claim that they belong in another era? Not me. I wouldn't even want to go back fifty years, much less several hundred.
For a brief time when I was young, I lived in the military housing on the grounds of the Air Force Academy. The USAFA is set against the foothills of the Rocky Mountains. Part of the sprawling acreage is woodland; the rest is rolling foothills covered in prairie. There's far more open acreage than developed land. Somewhere on the grounds of the USAFA is a preserved settler's cabin. You can't go in, but you can peer through the window. 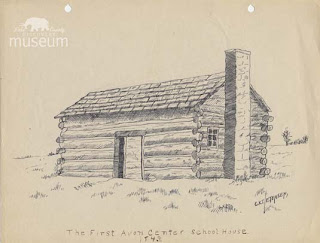 (this isn't a drawing of the actual cabin. The one shown here is a bit bigger than the real thing, but it's close.)
The cabin is barely big enough for a table and a bed. Narrow stairs lead up to a loft. Think "Little House on the Prairie" then shrink it by 80%. That's what real log cabins were like back then.
While snowdrifts usually melt between storms on the Colorado prairie, higher up in the mountains where the miners lived, snow accumulated from December through April.  If those miners were lucky enough to have a cabin, being stuck inside 400 square feet with several smelly, grumpy, disease-ridden, dentally-challenged, stir-crazy men for five months was probably as hard on the mind as it was on the body. I don’t even want to imagine the hardships endured by the ones who lived in tents.  I know that people survived that, but I'd never want to be one of them.
If I were magically whisked away to the past (Can one be scientifically whisked away into the past? I think I'd prefer that.) I know that I wouldn't survive. One mistake, and I'd be a goner. I can imagine my bare butt freezing solid to the outhouse seat in the middle of the night, and my cabin mates finding a rather undignified corpsesicle in the morning. Or the food I canned would have improperly sealed and I'd die of botulism. Or I'd foolishly invite Alferd Packer* into my my cabin in the middle of a snowstorm, and that would be all she wrote for my plump, delectable ass.

Winter now isn't what winter was then. Winter now is the Nutcracker Suite ballet, beautifully wrapped gifts under a twinkling tree, skiing, trips to Cancun, and five pounds of weight gain from all the holiday goodies. It's excess, not deprivation. So no matter how low I can get during the hours of winter darkness, I try to think about things such as watching bright red cardinals at the snow capped bird feeder or pine needles preserved in a coating of ice and be immensely grateful that while the northern hemisphere sleeps and dreams of spring, in this century, none of that beauty is lethal - as long as I stay inside.
*After I wrote this, I realized that outside of Colorado, few people would know who Mr. Packer was. He's probably the only accused cannibal in US history  - maybe world history - to have a university dining hall named after him.

Posted by Kathleen Bradean at 6:00 AM