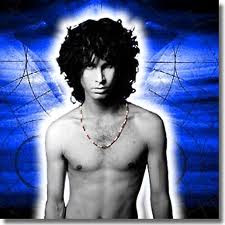 Such a piece of your soul

When you give up the chase

Feeling it hot and cold

It's the nature of the race

It's the unknown child

So sweet and wild

It's too good to waste

- Joni Mitchell, "The Blonde in the Bleachers"

I was a senior in high school. He was my classmate, the lead singer in a Doors tribute band. He didn't really look much like Jim Morrison but he had that wiry rock 'n roll build, verging on emaciation, like he never ate a square meal - like he survived on pure music. He had narrow hips like Jim's, fingers splayed and battered by his guitar strings, a wild cloud of coal-black hair. With the arrogance of youth, he dubbed himself the Lizard King.

I only kissed him once, at a party the night before graduation, but during the previous year I had watched him play many times. I was seduced by the mystery of rock and roll. Not by the glamor - there wasn't much glamor about a pimply high school kid - but by the sense that rock musicians, my schoolmate included, were some sort of fey creatures, half-angel, half-devil. Creatures with power. They could make you sweat and yearn. They could make you dance even when you swore you wouldn't. Rock and roll had a kind of irresistible, dark magic. Its danger was enticing. It could sweep you away.

Sex, drugs and rock 'n roll. I don't know about the drugs part, but nobody has to tell you that rock and roll is about sex. Morrison sings, "Come on baby, light my fire." Lennon belts out, "Why don't we do it in the road?" Jagger complains, "I can't get no satisfaction." We all knew what they were talking about, even when we were clueless teenage virgins. Bare chests and gyrating pelvises reinforced the message, but even without the visual reminders, the lyrics and the music make it clear. We're not talkin' about Platonic love, baby.

Sexual energy isn't the only draw of rock and roll, of course. There's the beat that takes you over, dives into your belly and loosens your limbs. I'm convinced that the drums wake some sort of ancestral memory, readying us for tribal ritual. Of course, that ritual might have been tied up with sex as well.

I'm currently reading Keith Richard's biography, Life. I didn't plan this when I scheduled this topic months ago - just one of those weird coincidences. I'm finding the book both entertaining and enlightening. There's a surprisingly candid account of Richard's heroin addiction. (The Stones definitely celebrated the "drugs" part of the unholy trinity.) The stories that amaze me, though, are the accounts of how fabulous songs seemingly came out of nowhere, how classic recordings were caught in one take. Spontaneous genius. Revelation. Like I said, half-angels.

The flip side is that Richards spent his whole life immersed in music. He started playing guitar when he was in elementary school (right after World War II, before rock and roll really existed). He sang in a choir before his voice broke. He quit school and dedicated his life to studying and dissecting the blues. The Rolling Stones were originally a blues band. Who knew?

(Of course, rock and roll has its roots in the blues. But I'm not qualified to talk about that - I didn't really become aware of the blues until the middle of my life. Maybe someone else's post this week will explore this connection.)

So, the flashes of sudden brilliance seem sudden and miraculous, but the foundations had been laid a long time before. When you live and breathe music, your conscious and unconscious seething with melody, rhythm, and rhyme, it's not completely surprising that insights and inspiration bubble to the surface.

It's not all that different from spending your entire life immersed in books and one day vomiting up a novel.

I've never written a story about rock and roll. To be honest, I'm afraid I couldn't capture the magic. I'm not a musician myself. I can imagine what it must be like, up on the stage, energy flowing in an endless circuit from one member of the band to the next, flying higher than any drug can take you. But I really don't know if I can make it real, convincing - if I can seduce my readers the way I've been seduced.

Plus I've read too many tales in the last few years about vampire rock and roll idols (sigh). I think I'm jaded.

And I'm an old fart now, with so many aches and pains that dancing requires an anesthetic. Joni sings, "It's youth; it's too good to waste." I'm grateful that I didn't waste mine, but as the Starship wrote in "Love Rusts", "Youth is something you can't hold on to long".

The music still gets to me, though. We'll be in a bar, having a quiet drink, when the DJ will put on "Under My Thumb", or "Hurts So Good" (John Mellencamp), or "Life in the Fast Lane". And I can't sit still. I'll toss my purse in my husband's lap and jump up into the aisle. I'll pay for it later, physically, but I can't say no to rock and roll.

You know what Bob Seger sings: "You can come back, baby. Rock and roll never forgets." Of course that song also includes "Now sweet sixteen turns thirty one". Thirty one is way back in my past! Still, I haven't become immune to thrill, the buzz, the spectacular way that great rock can turn you on.

I hope that I never do.