A Lifetime Love Affair With Rock And Soul Music

They say the brain is the most important sex organ. And that rock and roll is about liberation and sex, not necessarily in that order. So just imagine how the brain can enhance a lifetime love affair with rock and soul music....

My best memories of 7th grade are singing doo-wop with black kids in the empty halls of the adjacent elementary school where we found that magical echo. "Get A Job." "Book of Love." I dug the rhythmic energy and emotional expression, the camaraderie, and the joyful experience of making and hearing the sound of vocal group harmony. This is how and when I fell in love with rock and soul music.

My 13th birthday present was a used, luggable reel-to-reel tape recorder, which I used to tape the radio count-down of the top 40 records of 1958. I had already acquired most of them illicitly from a local record store, before that fateful moment when I got caught in the act.

Rock and roll radio was the soundtrack to my life from my teens through my thirties. Songs like "What'd I Say," "Only the Lonely," and "Be My Baby" are fixtures in my play lists to this day. Nostalgia lurks at the periphery, but it's the intimate encounter with the exceptional musical artistry of these records that evokes the dopamine rush.

When the Beatles exploded on the scene our freshman year, my college roommate taught me to play guitar. We both wrote songs, individually and together, at times in the vein of "Please Please Me" or "She Loves You," at times more garage-like. The next year we started a band. I fronted the group, on rhythm guitar and lead vocals. Here's one surviving artifact from that band, recorded in December 1965 at the college radio station:

Pop music charts always intrigued me. In college I collected end-of-year charts from radio stations all over the country and came across a year-end issue of Cashbox magazine including yearly top tens from 1950-1966. It baffled me that the year's biggest hits were often nowhere near the top of these charts, like "Singing the Blues" in 1956 or "Are You Lonesome Tonight" in 1960. This puzzle launched a brain-worm that has kept me persistently working on how to compare and rank achievements across time periods.

By age 22 my dopamine-laced years of singing, playing, writing, and listening to rock and soul (and jazz and folk) music had developed listening habits and skills that have continued to serve me well over the years. In a different life I might have become a record producer. But in this life, after college, my love affair with rock and soul music entered a more cerebral phase.

Out of curiosity I conducted my own research, collecting weekly data from old Billboard charts in the Philadelphia public library. With my first cassette recorder, in 1969, I pulled an all-nighter to tape the first radio program to cover the whole history of rock and roll. Soon after, I read Charlie Gillett's masterwork on "The Sound of the City."

These activities combined to transform me into an amateur historian of rock and pop music. I began to collect records purposefully. For example, reading that Chuck Berry got his bag of tricks from Louis Jordan and T-Bone Walker, I sought out great collections of their music and fell in love with both of them. This opened up the whole wonderful world of post-WW II rhythm and blues.

I developed the hobby of using my collection to make what came to be known as mix tapes. My earliest projects were 90-minute chronological slices of rock and roll history, like "Best Rhythm and Blues 1948-1957." I incorporated the best songs I had missed growing up as I came upon them, typically on "oldie" compilation albums. Even with a mix like "Best of Muddy Waters" or "Greatest Soul Ballads," my first tendency is to sequence tracks chronologically. I particularly enjoy listening to the evolution of the music as it actually happened.

Compiling mix tapes has been my enduring creative passion: discover, collect, listen, imagine a compilation, perfect the list and its execution, enjoy and share the results. The hobby remains fulfilling because with each project I immerse myself in the relevant music with a coherent focus. I enjoy carving the result to my liking, but I absolutely love the experience of listening with heightened attention.

Attentive listening sensitized me to sound quality. I began to care about finding better-sounding versions of my favorite recordings to use for mix tapes. My vinyl record collection topped out around 1800 albums. From the late 1970s into the 1980s, I recycled many albums for sound quality upgrades.

Then CDs arrived in the mid-1980s. When I realized that reissues on CD, for the most part, provided a step backward in sound quality, I embarked on a seven-year stint as a constructive watchdog music critic under the umbrella "Reissue Issues." Since my bi-monthly columns (in Digital Audio and Rock & Roll Disc) covered just about all pop music from the 1920s to date, record companies sent me an incredible amount of great music on CD. My wife and I remodeled our house just in time to set aside a room and build custom shelves for this largesse. 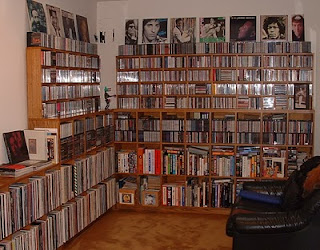 From the start I have kept a database of my CD collection, which includes assigning each CD one rating for musical quality and another for sound quality. I design lots of custom reports for my own amusement, to help me see the collection from a variety of perspectives. At times a delight, at times a conundrum, my database reports constantly challenge me to reflect on how the albums and artists of one time period compare with another. I also developed a "Pantheon of Rock & Soul Artists," a visual array that carves musical history into vertical time slices from left to right, and ranks artists within each time slice in horizontal tiers of "greatness" (or "irreplaceability") from top to bottom.

While working within this historical perspective, I've continued to keep up with current music through my annual (since 1982) project to compile the Best Tracks of each year. I start early in December revisiting the best of what I've collected myself, while also researching critics' end-of-the-year lists to expand my horizons. I spend hours and hours listening to both familiar and new (to me) music, winnowing dozens of songs down to those that best capture the Year in Music and fit on one CD. I've always really enjoyed this process, but never as much as since iTunes software came to serve as the perfect environment for doing it. Burning the CD is almost an afterthought.

For me, one effect of doing this annual project is an ongoing reassessment of how current music stacks up against music of the past. The result of this ongoing reassessment is - IMHO - a stark contrast between the long history of great music emanating from top tier artists of the 1950s through the 1980s and the almost complete disappearance of that same level of excellence in the last two decades.

Cards on the table: Bob Dylan, The Beatles, The Rolling Stones, James Brown, and JImi Hendrix are my top five rock and soul artists of all-time. Some other vintage top tier artists are Chuck Berry, Otis Redding, Ray Charles, Bob Marley, and Led Zeppelin. Four artists from the 1977-1990 period rank in the top tier: Bruce Springsteen, U2, Prince, and The Clash. Second tier artists from 1977-1990 are Public Enemy, Elvis Costello, and Talking Heads.

From the latest time period, 1991-2010, Radiohead, R.E.M., Lucinda Williams, Jack White, Kanye West, and Arcade Fire are my top artists. I really enjoy their music; I think Arcade Fire and Kanye West made the best pop albums of 2010. But, in my book, none of the 1991-2010 artists meets the standard of excellence set by the top tier artists, and only Radiohead makes tier two.

The latest phase of my rock and soul love affair is motivated by the desire to transform my music activities from solitary pursuits into social ones.

Until the pop music ground started shifting so dramatically during the 1980s, I felt unbridled passion for the music, strong historical continuity, and a sense of solidarity with a community of fellow rock and soul music lovers. As time passed, all three sources of nourishment began to diminish. The music (videos) came from different places, connections with the past were tenuous, and audiences were fragmenting.

The solitary intellectual in me strives to make sense of the host of changes in business practices, technology, politics, and culture that collectively ended the Rock and Soul era and ushered in a whole new paradigm of music distribution and consumption. But what I really crave are conversations with fellow travelers about their experiences on the same road.

When I seriously began to imagine how to make that happen the idea of an interactive website became irresistible. I've been working on a shoestring budget for a couple of years now and can begin to see light at the end of the tunnel. By September I expect to launch Rock 'n Soul Alley, where, as Alley "Gator," I will host blog-driven conversations on music (songs, albums, artists) and music listening and collecting, past and present. Registered visitors (Alley "Cats") can create their own Profile and post comments as well as their own lists of songs, albums, and artists. 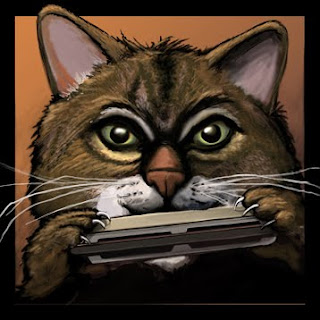 The site will also feature materials to help provoke conversations that I haven't seen anywhere else, including an interactive version of my CD database, the Pantheon of Rock & Soul Artists, and, closest to my heart, The Rock & Soul Timeline, an interactive list of over 2200 songs from the last six decades in chronological order. The Timeline will include facts about each song, commentary on many of them, and, if possible, pairs of sound samples of a selected few, to illustrate such things as how cover versions sound different from the originals.

My hope is that Rock 'n Soul Alley will come to support an online community where rock and soul lovers share their knowledge and enthusiasm with each other, and that this community will serve to celebrate and preserve rock and soul music as a living, breathing part of our culture, not just another relic of a bygone era.

If you'd like me to notify you at launch time, please send your email address to Gator (at) rocknsoulalley.org.