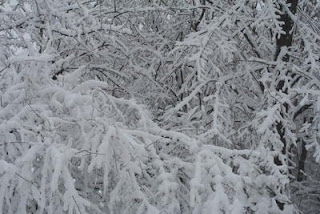 For the past seven years, I've resided in a tropical country where we have three seasons: the hot season, the rainy (and hot) season, and the laughably-titled "cool" season, when the temperature occasionally dips into the seventies. Thus, I've been deprived of winter for the better half of a decade. Before the move, though, I lived in rural New England for more than twenty years, so I have plenty of experience with all the joys the season brings, for example, blizzards, ice-storms and that nightmarish anomaly that seems to be a Massachusetts specialty, freezing rain. I remember winter only too well: power outages, snow tires, storm windows, shoveling, hauling firewood, pulling all the winter clothes out of the attic, making sure your anti-freeze is full... After spending two years in balmy California then returning to my native clime, I came to realize that winter in a place with serious weather is an incredible amount of work.

I usually go back to the U.S. once a year to visit family, but in the spring (during the excruciatingly hot season in my adopted country). Winter is a vivid but increasingly distant memory. I do find myself waxing nostalgic and romanticizing the season. I imagine the crisp, hushed beauty of a frigid night, when the stars glitter like faraway diamonds in the velvet sky. I remember the excitement of waking up to find the trees cloaked in a soft white blanket, the river a silent ribbon of ice, the footprints of a rabbit the only sign of life in the snow-smothered world. I find myself missing the camaraderie of working with my husband to clear a path up our long driveway to the street - conveniently forgetting aching backs and frost-bitten extremities. Memories of childhood delights return to entice me: racing down a snowy hill on my Radio Flyer, digging snow houses out of the piles left by the plows, sitting on the wooden bench next to the flooded and frozen tennis court to don my cherished white figure skates. The scent of wood smoke hanging in the air - Campbell's tomato soup topped with Cheerios and grilled cheese sandwiches for lunch after stripping off my soaked snowsuit - real cocoa topped with marshmallows to warm my numb fingers... I could go on and on. Yes, I do miss winter, no matter how hard I try to focus on the dangers and inconveniences it brought.

In a similar vein, I can relive the experiences of true winter by incorporating the season into my fictional worlds. My most recent release, Almost Home, takes place during a New England blizzard, which traps the two heroes and the heroine in a eighteenth century farmhouse (modeled after the home of one of my former neighbors). My M/M novel Necessary Madness is also a winter's tale. In one of my favorite scenes, the protagonists, driving home in a storm, stop at a closed, snow-clogged highway rest area because - well, they can't wait any longer:

They’d left in a rush, barely polite. In their eagerness to get back to Rob’s apartment, they’d refused offers of coffee and breakfast. The one-hour trip from Petersham to Worcester seemed endless, especially since the state of the roads demanded extra caution.

Rob’s erection throbbed, painful and demanding. He guessed that Kyle was hard too, though with the bulky jacket and scarf, he couldn’t tell for sure. Kyle felt Rob’s gaze. He raised his eyebrows in an unspoken question and his full lips curled into a smile, but he didn’t speak.

Rob couldn’t stand it any longer. They were coming down the hill into Gardner. There was a rest area near the city line. Rob yanked the steering wheel and the car swerved into the exit lane, cutting off a truck easing up from behind.

“What the hell are you doing?” Kyle yelled. The rest area hadn’t been ploughed yet. The Saturn skidded for several yards before it came to rest in a parking spot. Rob scrambled out, then came around to open the passenger-side door. “Come on. I just can’t wait anymore.”

The lot was deserted. Wind rustled the tall pines sheltering the building that housed the toilets, knocking clumps of snow onto the windshield. Rob grabbed Kyle’s hand and practically dragged him out of the car.

“I’ll break down the door if I have to.” Rob was desperate. But the men’s room was open, although the electricity appeared to be off. Wan light entered via a dirty window near the ceiling. He pulled Kyle through the door and pressed him against the tiled wall, devouring his mouth. Kyle responded with equal passion. Rob ripped open the snaps on Kyle’s jacket and grabbed at his crotch.

“I’m sorry. I’ve got to have you. Now. I can’t concentrate. I can’t drive. All I can think about is you.” He unfastened Kyle’s belt and unzipped his fly, then yanked the jeans down around Kyle’s knees. The young man’s cock sprang out, huge and ready. Rob cradled it in his hands, then squeezed hard. Kyle groaned.

“Rob, what if somebody comes?”

Rob chuckled as he wrestled with his own cold fly. “Somebody is going to come—you and me!”

“No, really. If a state trooper came in to take a leak and found us here—you might lose your job.”

“I don’t care. I can’t help it. Honestly, if I don’t fuck you right now…” Rob didn’t bother to finish the sentence. He turned Kyle to face the wall, bracing the other man’s hands against the cold ceramic surface. He wrapped his arms around Kyle’s chest and rubbed his cock back and forth in the boy’s ass crack. Kyle whimpered and ground his butt against Rob’s hardness, until Rob was sure he’d explode.

“Do it,” Kyle gasped, as Rob reached down and gripped his partner’s cock around the base. Kyle bent forward, presenting his rump. Rob spit on his fingers, then slipped one into the crevice between those pale globes. He probed the tight knot of muscle guarding Kyle’s entrance.

“I’ve got a rubber but no lube,” he whispered, wriggling his digit into Kyle’s rear hole. Kyle writhed in response. “Nothing but spit.”

“I can take it.” Kyle caught his breath as Rob inserted a second finger. “I can take anything you give me."

When I wrote this, I was there. All the sensory details were clear. I could feel the sickening swerve of the out-of-control vehicle, hear the pines groaning in the wind and the muted splat of snow blown onto the windshield. I shivered in the bitter chill of the unheated building, the scent of disinfectant rising in my nostrils, goosebumps prickling my bared flesh. Pasting the segment in here, I am surprised to note that almost none of the wintery sensations actually made it into the scene. The focus (appropriately, I hope) is on the sexual tension building between the characters. Winter is in there in the background, though, a contrast to the heat of my characters' desperate coupling.

Unlike some people who move to the tropics, I didn't leave my former home to escape from winter. Life is easier now, I'll admit, but I sometimes hunger for a taste of the cold, dark, snowy season and the complex emotions it evokes - fear, frustration, comfort, awe, hope. When the temperature drops below zero, you truly appreciate warmth. When the sun sets at four in the afternoon, you kindle a fire on the hearth to remind yourself light will return. Living without winter, I write to keep those feelings alive.