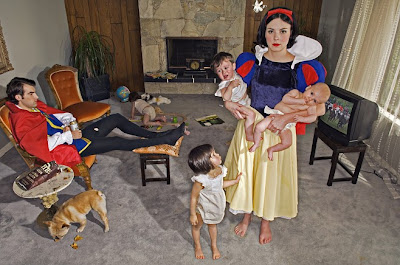 “and they lived happily ever after.”

Those words at the end of a story always sounded like a blessing to me as a child. I would repeat them out loud, like a spell or a chant.

But I wasn't interested in how the “ever after” worked. I never gave it a thought. Winning the right to the ever after was much more important than how you lived it.

Happily ever after was a blessing, not a prophecy. It was meant to mark the fact that love, true love, heart-stopping, once-in-a-life-time, struck-by-lightning love, had triumphed despite all that fate and circumstance could throw at it. It is this transcendent moment of blissful fruition that is meant to last for ever after in our hearts.

In my view, a Romance novel that doesn't deliver that transcendent moment short changes the reader in the same way that a country house murder mystery would if the no one found out who the killer was.

If I read a novel that declares itself to be a Romance with a capital R, I expect to be taken on a very specific journey. I want the novel to be a cathartic experience. It should have at least two people that I care about and who deserve something more and better than a life of shallow compromise, or corrosive loneliness, or bitter regret. It should subject them to the misunderstandings, injustices, social constraints, fears, small acts of malice and major misfortunes that regularly rob us of our happiness, and it should allow the two central characters to recognise and act upon the fact that their happiness depends upon their potentail to offer each other love, make each other complete, become together something greater and more wonderful than they could ever be apart.

The purpose of Romance is to transcend real life – that is why it needs to have that “Happy Ever After” ending.

I enjoy reading romances but I am not temperamentally suited to writing them.

In my day to day life, I am deeply distrustful of glamour and charisma, both of which seem to me to be a form of deception.

I am sceptical of the honesty or self-knowledge of men who claim to love at first sight; I cannot imagine what such love is built on other than a hormonal surge or conditioned response that is bound to fade with time. How can they love a woman they do not know? What is such a love worth?

I doubt the sincerity of the big romantic gestures. They seem to me to be chat-up lines with extended choreography, self-aggrandizing clichés that spring not from love or from a deep knowledge of the woman's needs but from the man's desire to be attractive to a woman he wants to fuck.

As you can imagine, this makes it hard for me to write the male romantic lead.

While Romance may be beyond me, I do frequently find myself writing about love. Love is something we do not choose and cannot control. Love can be a source of happiness or despair, of selflessness or jealousy, love can change who we are.

Ironicly, it seems to me that a relationship built on the props of Romance is unlikely to survive the move from “once upon a time” to “every time until one of us dies” while real love at least has a chance of growing strong enough to create a happy ever after.

Perhaps because I write about love, it turns out that I have written a story that describes a Happy Ever After. I've attached it below. You can decide for yourselves whether any romance is involved.

Most men lie about sex. I don’t know why. We talk about it often and loudly in all those places where men gather without women. We talk about who we’d like to fuck and how and sometimes where. We brag about our performance on one-night-stands or with whores or with the wives of friends. But, to my ears, these conversations lack authenticity. They have about them a whistling-to-show-I’m-not-afraid-of-the-dark quality that is more than a little pathetic.

I am usually silent when these conversations take place. No one in my circle of male acquaintances, hereafter referred to as, ‘The Lads’, questions this. I was never a handsome man and I am no longer a young one. I think the assumption, in the language of male-(don’t worry, we’re all hetero here, honest)-bonding, is that “Fat Frank isn’t getting any.” What else could explain my silence?

In reality, I remain silent because I think The Lads would not react well if they knew the truth. Fat Frank, (a nickname chosen for its alliterative charm, its factual accuracy, and the ease with which it can be rhymed with wank) deviates from one of the accepted norms of married life. I break the last taboo: I like to fuck my wife.

I mean I really like to fuck my wife. I think about it before we do it. I give myself up to it completely when I’m in her. I hug the memory of each fuck to me, reluctant to let it go.

Liz and I have been married for eight years and been together for twelve, so we must have fucked thousands of times. I know the conventional wisdom is that repetition blunts the experience but Liz is like a whetstone for my knife-sharp desire, each time I rub against her the edge gets keener and cuts deeper.

Perhaps if Liz was the kind of woman that The Lads ogle and comment on (but never EVER actually speak to) I could share the reality of my passion with them. They would slap me on the back or punch me in the arm and shout “You lucky bastard.” Jimmy would say, “Who’d have thought Fat Frank would have it in him?” Robbo would grin and say, “Who’d have thought Fat Frank would have it in her you mean.” I would be expected to drop my head in false modesty and then explain of how Liz goes all night like a racehorse on speed. Jimmy would say, “If you ever need a hand with her, Frank, you only have to ask.” Everyone, including me, would laugh. I’d be offered a beer and my status in the group would rise.

But Liz is not the kind of woman The Lads notice. She’s not a fantasy figure. She’s a normal, healthy, slightly over-weight woman in her mid-thirties.

Liz, it seems, is extraordinary only in my eyes. Her eyes are green with little flecks of gold that shine in the sunlight. Her hair, which she keeps short, curls against the back of her neck as if caressing it. Her smile is crooked and filled with wickedness. Her skin is soft and pale and flushes when she is aroused. But the most extraordinary thing about Liz, the arse-clenching, cock-stiffening, heart-aching thing about her is that she loves me.

I’m not talking about something vague here, some Hallmark sentimental notion of love, a fantasy emotion propped up by romantic gestures and mutual self-delusion. I’m talking about a warts-and-all, robust, uncompromising and unconditional love that crashes over you like a big wave, taking your breathe away but leaving you excited to be alive.

Liz has known me for a long time. We went to the same school. We saw each other grow up. Liz knew the bookish, solitary boy I was and the hormone-charged, cripplingly shy youth I became, and yet she still fell in love with me. The power of being thoroughly known and thoroughly loved is almost impossible to get into words.

According to Liz, words are my weakness. She thinks I use way too many of them and get lost in the patterns that they make. It’s true that sometimes I can be too introspective for my own good. I get hooked on ideas and concepts and lose touch with the day-to-day world where reality happens. Left to my own devices I could float away from the world and become an eccentric old fart who laughs at obscure references no one-else understands. Liz saves me from that.

It’s not that Liz doesn’t like ideas. She loves to hear me talk about them. She just doesn’t let herself become seduced by them. One time I was going through a phase were I was obsessed with the early Greek philosophers. Liz bought me a copy of Plato’s “Apology” written in defence of Socrates. Inside the cover she wrote, “An over-explored life is not worth living.”

Liz and I don’t speak much when we fuck. We laugh and groan and grunt and sigh, but mostly we let our bodies do the talking. From the beginning, Liz has been the one who initiates these kinds of conversation. There’s a certain look she gets that I know means that she wants sex and she wants it soon. I never act on the look alone. Over the years, we’ve developed a little ritual: when the need is strong, Liz will stand close to me, sometimes in front, sometimes behind, put her mouth next to my ear and whisper, “Fuck me.” Those two words are like a trigger, they always make me hard.

Most of our fucking is outside of the bedroom. Liz thinks that beds are for sleeping on and that floors (and sofas, and tables and stairs) are for fucking on. She has whispered, “Fuck me,” in every room in the house. Although we’ve never talked about it, we both understand that I will fuck Liz whenever and wherever she whispers those two little words. We’ve fucked on Ferry Boats, in cars, in phone booths, on the steps of public buildings. I love the risk that this introduces and I love the sense of wickedness that comes from a secret shared.

Liz is the only woman I’ve ever had sex with. Now there’s a statement that would make The Lads shuffle their feet and pretend that I hadn’t spoken. As a conversation stopper, it’s on a par with “Have you opened your heart to Jesus?” The fidelity implied by this statement is not a badge of honour. I have made no sacrifices. Liz gives me everything that I need and I give thanks for my good fortune everyday.

I’m sure that Liz and I are not the only couple with this kind of relationship but I’m equally sure that we are a minority. Many marriages run out of passion or find they no longer need it.

The real reason it is taboo for me to talk to The Lads (none of whom are lads any longer and all of whom are or have been married) about the reality of my sex life, is that they don’t want to be confronted with the possibility that, if they had found the right person, they too would look forward to fucking their wives.

So, I will continue to be silent when they brag and boast and encourage one another. It is the polite thing to do. And it gives me time to think about Liz and what we will get up to the next time that she whispers in my ear.