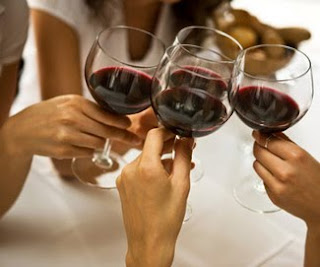 Cougars are all over pop culture in the past couple years. But the first time I noticed the phenomenon was several years ago, at my own book group, of all places.
Of course, we're one of those book groups where it's more about drinking wine, having dinner and chatting about whatever we like than actually dissecting books. So when the chat one night turned to age (in the context of ourselves versus our husbands), imagine my surprise at being one of only two in the group with the "traditional" configuration of being younger (by 4 years) than my husband.
The one other "younger" wife was really younger, by a full two decades. So I really didn't feel like I had any company in the traditional role.
A couple of the gals were only a handful of years older than theirs. But the other age differences were more significant. 9 years, 13 years, 15 years. I knew about the 9 year spread, but how did I miss the other two?

Simple. It just hadn't come up, since to the participants, it wasn't an issue.

With the 9 year couple, how they met was interesting. It was New Year's Eve in San Fran, where they were both visiting at the time, one from LA and one from Boise. They ran into each other in a dark club, danced, hit it off, and at the end of the night had nothing to write phone numbers on to keep in touch. As they parted, he joked that all she had to do was remember his last name...he was the only Jew in Boise.

She called, and long story short, even in the bright light of day, all their age and differences in social situation laid bare, they each saw something special in the other. Eventually, they both moved to yet another West Coast city, sight unseen, to live together, married, and are happy owning a business together. Their ages are irrelevant, except in one aspect:  When they first met, he was young and had no desire to start a family, whereas she was quickly running through her prime fertile years. When they finally did get to the point where they considered having a child, they found that nature had made that difficult to impossible.

Beginning in August, I am publishing a series of four stories involving cougars and cubs, called Seasoned Women.

Forget about calling it May/November, these mature women and their hot, young men bring a spark to every season, all year round...

Here's an excerpt from Spring Training:


The sight of the player’s hand about to touch hers set off a clamour of anger in Aaron, but before he could react, Teri withdrew her hand to a safe distance as Emery spoke up.

“What the hell, Chet? She’s my freaking mom. Get your paws off her.”


The other two guys were laughing hysterically as Chet backed off, scowling at Emery for a moment before turning the charm back on. “Fine by me. I like older women, and I’ll even forgive you for having this joker for a son. I’m sure you did all you could in raising him.” He sent a practised, smouldering look her way that had Aaron rolling his eyes.


Teri smiled sweetly. “Nice to meet you, Chet. If I see any desperate older women, I’ll definitely send them your way.” She turned to Aaron and Emery. “Are you guys ready to head home?”


Mitch protested, “Hey, it’s early. You guys aren’t calling it a night already? We’re on our way to The Billboard; they have a live DJ tonight.”


“C’mon, Mom.” Emery encouraged. “You know you want to go dancing.” He nudged her playfully.


Aaron and Teri locked gazes, and he shrugged, wanting to leave the decision up to her since he was their ride home. He really wasn’t up for a night of babysitting this motley crew, but had to admit the idea of Teri moving on the dance floor held undeniable appeal. Her sparkling eyes searched his for a long moment before she turned to her son. “Okay, but remember I turn into a pumpkin at midnight.”


The Billboard was warm and packed, and Aaron wedged his way up to the bar while the other players disappeared into the crowd and Teri and Emery headed straight onto the dance floor. He ordered a bottle of water then took it to a vacant spot along the railing surrounding the dance area. With the height of the players, he was able to immediately spot Emery and, less visibly, Teri among the gyrating forms. He slid along the rail, trying for a better view.


Teri was lost in the rhythm, swivelling and swaying with the music. Aaron’s mouth went dry as he ran his gaze down her slender back to those curvaceous, circling hips, effortlessly keeping the beat as she danced in front of Emery. They moved around, and now Aaron had a look at her joyous face, laughing up at her son.


Suddenly her eyes lowered from Emery’s and locked on Aaron’s from across the room. If anything, her smile got wider and his pulse leapt as she crooked her finger to beckon him. He was sure the gesture was meant to be convivial rather than sexual, but his increasingly interested body made its own interpretation. Without conscious thought, he set down his water and threaded his way through the gyrating crowd, receiving a few blatant touches and even more looks. Aaron disregarded them all, completely focused on Teri, and he began to dance as he reached the pair.


Aaron loved to dance and it was easy to give himself over to the pounding music. If anything, Teri looked even smaller in the midst of the chaos on the dance floor, and Aaron glided closer, until there was barely air between them. Emery had turned away and had his arms wrapped around a tall blonde from behind, grinding into her. Aaron was left to partner Teri, and they moved together well into the next song before he finally gave in to his rising need to touch her.


The first contact was three fingers lightly resting on the waistband of her jeans, just above her hip. As she raised her arms above her head, her shirt lifted just enough so the tip of Aaron’s finger found bare, warm flesh. Awareness sizzled through him, and he could feel his body react, his cock thickening slowly, inexorably.


Teri’s eyes were upturned to his, her lips parted, and he knew she was sharing his arousal as they moved together in public foreplay. She placed her hand on his forearm and he recalled how her touch in the kitchen earlier had taken him right out of his funk and ignited the first spark of attraction for her. Not as the mom of his teammate, or ally in his fight to keep Emery on the straight and narrow, but as a vital, desirable woman.
Posted by Stacey at 5:25 AM