For me, nothing brings a story more vividly to life than a strong sense of place.

Imagine Stephen King’s work without his brilliantly rendered small towns. Imagine Julie Smith’s powerful mysteries with no descriptions of the city, or Sarah Paretsky’s without a sense of . The list goes on and on—and goes even further back than the modern era. Margaret Mitchell’s Gone with the Wind would not have worked without the reader being caught up in Scarlett’s love for Tara and her admiration for .

Place should be as important to a writer as creating realistic three dimensional characters—even if the setting is a fictional place. In my own work, is integral to every plot—and I treat the city as another character. The story is much more likely to engage the reader and their imagination if they can visualize the setting—and much more real to them as well. Nothing pleases me more than getting a review or an email from a reader saying reading my work made them feel like they were actually walking down the streets of the French Quarter or driving around the city.

And it’s really easy to do.

The sights, sounds, and smells of a city are so easy to render that I often wonder why more writers don’t pay more attention to those details. I want my readers to see themselves experiencing the same details that my characters are observing—the heavy smell of garlic outside Irene’s Restaurant, the thick greasy air outside the Clover Grill, or the powerful odor of pine cleaner the French Quarter reeks of every morning as business owners hose down the sidewalks. Those tiny details are what bring a story to life and allow a reader to lose themselves in a fictional world while sitting on the bus, in their living room, or on the beach far away from . Whenever I walk around New Orleans, I am constantly observing what is in store windows, the smells coming from restaurants or bars, the sounds of cars and carriage rides, what color the sky is, how strong the sun’s rays are, and the scents of the flora and fauna that proliferate here.

Place can also help you define and build a character. As I mentioned before, Gone with the Wind and Scarlett would not have worked without that strong sense of place Mitchell evoked in her prose. If we couldn’t see , experience its views and vistas, imagine its smells, Scarlett’s love for the place—which was one of the building blocks of her character as well as the story—would not have been so powerful, and the book most likely would not still be in print seventy five years after its first publication. (Dickens, Steinbeck, Hemingway, and Faulkner were also masters of place, and undoubtedly would not be considered literary masters if that key component was missing from their work.) 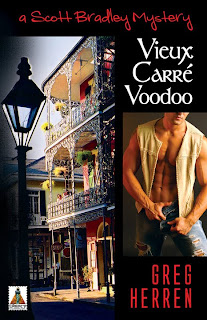 When I was creating my character Scotty Bradley, I kind of visualized him as the embodiment of the unusual spirit of —carefree and determined to squeeze every last bit of enjoyment out of life. Scotty grew up in , and like so many of us who live here, cannot imagine living anywhere else. His love for his hometown is an integral part of his character, and I think part of the reason why he is so loved by readers is because he is such an embodiment of the values and joie de vivre of the city. The books—and character—simply would not work in any other place, and in order to make those stories work, it was essential for me to try to capture what makes so unique and special on the page.

So, when creating your work, don’t forget how important place is to the success of your story. Transport the reader from their living room to a place maybe they’ve never been before, and make them want to go there.

Greg Herren is the award winning author of twelve novels, and currently works as an editor for Bold Strokes Books. His fourth Scotty Bradley novel, VIEUX CARRE VOODOO, will be published on May 15, 2010. Signed copies can be ordered by contacting the Garden District Bookshop in at gdkrewe@aol.com.

Posted by Kathleen Bradean at 9:47 AM