THE UNSUNG
By D Musgrave
There are heroes who are forgotten every day. How many of us remember that the first marathon is run because of Greek soldier? How many remember his name? Or that he was a messenger who ran 26 miles from the Battle of Marathon to Athens to announce that the Persians had been defeated? This is the premise for my guest blog post.

I think it's safe to say that most people in the world are somewhat familiar with the D-day invasion that took place during World War II. Many of us, if not most, have seen Saving Private Ryan, Band of Brothers, The Longest Day, or any number of other movies and documentaries about what could be argued was the turning point of the war in Europe.
The list of heroes from the invasion is long and would take many pages to list. Sadly, many of the names of those who were heroes have faded from people's memories. Even the memories of notable names such as Theodore Roosevelt JR, who as a Brigadier General landed with the first wave on Utah Beach, Normandy with the U.S. 4th Infantry Division, have become lost in the 66 years since the invasion.

Not only were there many heroes directly involved in the invasion, there was just as many behind the scenes who were vital to the success of offensive. One such man was Andrew J. Higgins. He never saw combat during the war, nor was he even in uniform. Nonetheless, his contribution to the war effort was just as important as any one private citizen.

If you watched Saving Private Ryan, you likely remember the opening scene where the combat troops were packed into amphibious crafts splashing through the surf toward the shores of Normandy. Those Landing Craft, Vehicle, Personnel (LCVP) were nicknamed Higgins Boats. 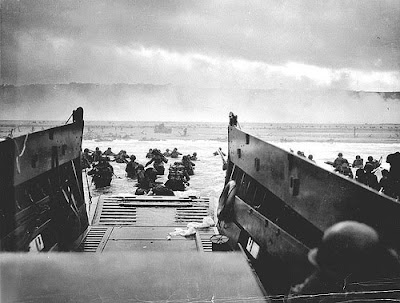 Andrew Higgins with the resources of his boat building company in New Orleans, LA was the inventor of that vital piece of military equipment. The success of the D-day invasion would not have been possible without Mr. Higgins creation. Praise for his invention came from everyone, including the enemy. Dwight Eisenhower commented that "Andrew Higgins ... is the man who won the war for us. ... If Higgins had not designed and built those LCVPs, we never could have landed over an open beach. The whole strategy of the war would have been different." It's even been purported that Adolph Hitler called Higgins the "New Noah."

Like Higgins, there are heroes who are forgotten by history every day. Most go unsung. Just like William Beauregard from my upcoming release Jamais Vu: A Love Forgotten. William Beauregard returns from WWII, only to find the visions of the death and destruction haunting him still. He can't shake them and it's pushed him away from his wife, Sheila. To rid himself of the ghosts, he must take a huge risk, one that could lose his wife to him for ever.

Jamais Vu: A Love Forgotten
by D Musgrave
Chapter One
Circa: August, 21st, 1945
Catching sight of the old house, it was as if a vise gripped his chest. Spanish moss hung from the huge oak trees lining the path leading to the front steps. It reminded him of carefree days before the war. Days he and Sheila would spend under the canopy, lounging on a blanket, making plans for their future. Gazing past the trees to the two-story brick house, he remembered the first time he laid eyes on it. It'd been in bad shape and needed lots of work, but even at first sight he knew it was home. Convincing Sheila to take a chance on the "money-pit" had been easy. Maybe she saw its potential as well.
He closed his eyes and inhaled, trying to concentrate on the familiar smells of the moisture-laden bayou air. Not long ago he thought he'd never see the house or his wife again. Suddenly, the throat-tightening scent of war flooded his mind. The stench of mud, blood, and death overtook the sweet scent of the bayou.
Shaking his head, he pushed it away, but it persisted, forcing itself on him. He squeezed his eyes shut and the visions rushed into the darkness. He heard the wretched screams of dying men over the roar of battle. The smell of death seemed to be permanently burned into his mind, along with tortured screams. Many times in the last few days, he'd wondered whether he'd ever be free of those gripping fears.
The thick, rolling accent of the Creole taxi driver wrenched him from his reverie. "Hey, mister. Y'all gonna be paying fer tha ride?"
"Sorry," William Beauregard replied. Dropping his Army-issue duffel bag, he paid the fare.
The taxi cab rolled away, and William turned back to look at the old house. It had been a plantation, and before that, there were rumors of it being the home of a notorious pirate. There were also stories of hauntings and ghosts, but he'd never seen anything like that in his time there.
Bending down, he grabbed the duffel bag and slung the strap over his shoulder. He began the walk up the long path to the front door. He knew Sheila wasn't expecting him. He'd managed to talk his way onto a cargo plane from Fiji before a troop transport could be arranged for the rest of his unit. His service to the country had been completed and all he owed the Army was to turn in his weapons, which he did in San Diego.
The walk to the house seemed longer than he remembered, but he figured that was because part of him was nervous about seeing Sheila again. He knew he wasn't the same man who'd left her three years earlier. It was easy to hide how the war had affected him in letters. He hadn't wanted to cause her any additional worry, so in his letters he made it seem as if his part in the war was more of a clean up effort instead of the slow, trudging, bloody job of leading men onto the shores and through jungle swamps to retake the islands from the Japanese.
Suddenly, he heard a scream behind him. He turned, but no one was there. The scream echoed again, this time to his right and closer. It was the same heart-stopping war cry he'd heard when the Japanese guerillas attacked his platoon. Their battle cries were a mixture of rage and total abandon, as if they wanted their enemies to know they were about to die.
He spun on his heels, ready to defend himself, but nothing was there. A cold chill wrapped him in its clammy embrace. He'd felt that chill once before—in the back of the cargo plane, alone, trying to sleep on the metal floor behind a stack of ammo crates.
A voice whispered coldly in his ears, "Save me," then all was silent. His heart hammered in his chest. He wanted to run for cover, but couldn't make his legs move. Another scream rang in his ears. It seemed to come from the house. This one was different. It wasn't the blood-chilling yell he'd heard before. It was a shriek of surprise.
Spinning, he saw someone running toward him from the darkness of the jungle. He dropped to one knee and reached for his duffel bag. His service revolver was in there and he prayed it was on top. Ripping the zipper open, he glanced up and a chill gripped his heart. The jungle had disappeared to be replaced by the safety of his front yard. The person running toward him wasn't a Japanese soldier; it wasn't even a man, it was his wife, Sheila.
Visit www.dmusgrave.com to find out more
Posted by Michelle Houston/Houston Michaels at 9:00 AM