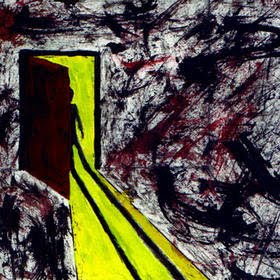 They're coming. I've locked the windows and the doors, but I know that won't keep them out indefinitely. Now I'm on the second floor, with no way to escape. I hear the squeal of the wooden front door being torn apart. Where can I hide? In the bathroom there's a cupboard under the sink, with a louvered door. I squeeze myself into the cramped space, close the door, hold my breath. Footsteps on the stairs. Shadows cast against the barred light that enters my place of concealment. My chest hurts; I must release the air trapped in my lungs. I allow myself to exhale, as slowly and quietly as I can. They've left the bathroom now and they're checking the closets. Maybe I'll be safe after all. Then the cabinet is thrown open and I'm dragged out, screaming, to stand before their leader.

Who are they, these invaders? Sometimes they are vampires, sometimes aliens or zombies, sometimes a cult of evil witches and sorcerers—always creatures with power. They are often fiendishly attractive, hardly ever physical monsters. Yet I know that they'll kill me, though I'm never sure why.

Just like my other dreams, my nightmares have elaborate plots. The motivations, though, are hardly ever clear. The only certainty in these dreams is fear.

Sometimes I try to negotiate with the leader, to bargain for my life. Sometimes I wake up just as I am dying. The worst dreams, though, are the ones where I discover I'm holding a knife or a sword, and plunge it into the villain's body, again and again. Then I awaken, drenched with sweat, my heart racing, trying to wipe the images from my mind. The most awful nightmares are the ones where I find myself turning into the evil one.

I shudder when I think about the sensations, the yielding of the monster's flesh as my blade enters. How do I know what this feels like? I've never stabbed anyone, but in my dream I don't hesitate at all. I can't get the scene out of my thoughts. I get up, use the bathroom, drink some water, trying to banish the taint of violence. Sometimes I'm successful, but the doubts linger. Am I really capable of such acts? Could I mortally wound someone under the right circumstances? If not, then why do I dream it?

In the real world, I consider myself a peacemaker. I dislike confrontation. I'm willing to compromise for the sake of mutual harmony. I consider most if not all wars unjust. I demonstrated against the Vietnam war and the invasion of Iraq. I strongly believe that violence is counter-productive, that it merely breeds more violence in a vicious circle of retribution. Martin Luther King, Mahatma Gandhi and the Dalai Lama are my heroes.

So what does it mean that I sometimes dream of wielding a knife against an enemy?

Unlike many romance authors, I've never created a warrior hero. A few of my books, notably Exposure and Necessary Madness, include some violence—murders, beatings, arson, attempted rape. After all, it's difficult to write a thriller without some spilling some blood. I'm never all that comfortable writing about these topics, however, and I don't think that I do it very well. When I wrote Exposure, I worried that it was unacceptably dark; reviewers, though, seemed to see it as almost a romp.

I've mentioned in previous posts that I occasionally use my dreams as starting points for my stories. I wonder if I could harness my nightmares in the same way. Horror is a genre that I find totally beyond my understanding (other than at the level of parody). Dark erotica, however, like the work of Helen Madden or Polly Frost, is a sub-genre that I appreciate even though I've never been able to create it myself. Perhaps I could use my own dark dreams as a starting point. I should mention that in the recurring nightmare above, my negotiation is sometimes sexual. I'll offer myself for the pleasure of the evil crowd, in return for my survival.

The scenario above is not, of course, my only nightmare. I dream of elevator cables suddenly giving way (the classic dream of falling); of fat, chitinous bugs crawling out from the walls and across my skin; of losing my husband and having no idea where he is or how to contact him. The experience of assaulting my enemy is the most disturbing, though. I'd like to believe that's not me—but how can I disavow any of the images concocted by my mind?

For our Saturday guest, I've invited Kim Richards, horror author and founder of Damnation Books, to join us. Meanwhile, I'm understandably curious about the nightmares of my fellow Grip authors—and of our readers.