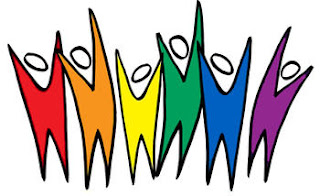 I've published a fair amount of M/M and F/F material, including my most recent novel Necessary Madness and my story "Rush Hour" in D.L.King's Lambda finalist collection Where the Girls Are. As I mentally reviewed my GLBT work, I came to an unexpected realization. More often than not, my same-sex pairs are not exclusively gay or lesbian.

My characters may be attracted to someone of their own gender, but they don't usually identify themselves as an official member of the corresponding homo-erotic community. Quite often, they have some experience with, and even desire for, the opposite sex. Even in my M/M romance (where, I've discovered, introducing any M/F interaction can be the kiss of death from a marketing perspective) a character may have a heterosexual back story. Rob Murphy, the hunky cop in Necessary Madness, is divorced with two kids. He's primarily interested in other men, but he doesn't fit completely into the gay pigeon-hole.

The place reeks of fish and rusted iron. Under these raw smells, I catch a whiff of Bom’s sandalwood cologne. He has lapsed into Thai with his cohorts, abandoning any attempts to communicate with me. Still, he makes sure that the bottle in front of me is always full.

Overwhelmed by the beer and the day’s events, I must have slept. I wake, disoriented, in near-darkness. A halogen lamp mounted on the next pier sends uneven shafts of light into the shack, but until my eyes adjust, I can barely see anything.

The chairs clustered around the formica-topped table are all empty. The table itself is littered with dozens of empty bottles. The room is quiet enough that I can hear the river lapping against the piles that support the building.

Then I recognize the sound of breathing. As this is sinking in, somebody moans.

“Bom?” There’s a creaking sound off in the corner.

“Here, Gary.” His voice is muffled. Someone bursts into laughter, which breaks off suddenly to become a groan of pleasure.

I’m beginning to be able to make out my surroundings. There’s some kind of platform at the far end of the room. The platform is covered with pale, writhing, naked bodies.

“Come on, Gary,” Bom coaxes. He is on his knees, poised above the prone body of one of his friends. Even in the dimness, I can see the gleam of his perfect skin, the smile on his ripe lips, the saliva dripping down his chin. He bends once more to the cock jutting up in front of him.

Another of his mates is positioned behind Bom’s hips. He grabs Bom’s buttocks, pulls them open, and begins lapping at his friend’s anus.

I think that I should be disgusted, but I’m not. I’m fascinated. My cock hardens rapidly. If I were sober, I’d probably find this alarming, but at the moment, it seems completely normal. I unsnap, unzip, and wrestle my cock into the open air. It swells further, grateful to be set free. I stroke it slowly, root to tip, my attention fixed on the scene in front of me.

For a while the action is languid, dreamy, slow motion caresses punctuated every now and then by a sharp intake of breath or a sudden groan. My cock surges in my hand in reaction. I can hear the slurp of tongues against wet flesh, but it’s a bit difficult to see the details.

Hardly realizing what I’m doing, I move closer, still stroking myself. The guy with his face buried in Bom’s ass sits back on his haunches. He looks over at me and grins as he rolls a condom over his impressive prick. He says something in Thai. Bom hikes his rear up higher. He wiggles his butt in invitation.

One of my favorite stories, "A Quiet Evening at Home", begins with the main character going to visit her boyfriend and noticing the woman sharing the lift:

Even by New York City standards, the woman next to me in the elevator was exotic. Skin like dusky velvet, pomegranate lips, eyes that you could drown in. One earlobe displayed seven gold rings of decreasing diameter, while a gold chain looped through the other and dangled to her bare shoulder. Her jet hair, elaborately braided and beaded, hung down to her waist.

Full breasts strained against her crimson tank top, which was damp with sweat. Her cutoff shorts were ragged and dusty, but they showed off the lovely swell of her hips to fine advantage. Red nail polish screamed from her fingers and her sandal-clad toes, all of which were decorated with rings of silver.

She was laden down with two obviously heavy bags of groceries, plus a purse and a huge tote bag. There was a sheen of perspiration on her brow. I could smell her natural musk, delicately augmented by some floral scent. I took a deep breath.

I could come up with many other examples, but I think I've made my point.

I think there are two reasons why my same-sex stories are not gender-exclusive. First, I don't have much real-world experience with gay and lesbian subcultures, but I have enough to know that the reactions can be fierce if you don't get the details right. Butches, femmes, bois, trannies, leather daddies, bears and bikers—the official GLBT world is complex, mysterious and highly politicized. I don't want to screw up and earn the scorn of the people who dream up and apply these labels. I don't mean to sound sarcastic. I'm certain these distinctions are meaningful and important to the people who have created them. I humbly admit that I don't fully understand this world and probably never will.

Second, I personally believe that sexual desire transcends biological gender, that practically everyone has some potential for being aroused by a member of his or her own sex. The guardians of the labels will probably disagree. My philosophy is unquestionably influenced by my own polymorphously perverse psychology. I'm attracted to both men and women—specific individuals, not entire classes—so it's easy for me to believe that other people are the same. Many of the individuals with whom I've been intimate have similar opinions, but this could be self-selection. Readers at least do not seem to find my switch-hitting characters implausible—or maybe they're just too turned on to be critical! (I can only hope!)

On the rare occasions when I write strictly gay or lesbian characters, they often don't fit into the expected mold. Loretta, the young lesbian software engineer in “Velvet” (in BLE 2009), breaks up with her girlfriend because Rhys criticizes her for wearing make-up and keeping her hair long.

Fortunately, GLBT includes the “B”, bisexual. So I guess I'm qualified to celebrate GLBT Pride Month with everyone else. Each of us writes what comes naturally. In my case, that means characters whose sexual identification is fluid. For me, one lover can be male, another female—each relationship is with an individual, not with a gender label.

What the heck—I may write it anyway, just to explore the potential. Who knows? Now that vampires are getting tired, maybe hermaphrodite tales will be the Next Big Thing.