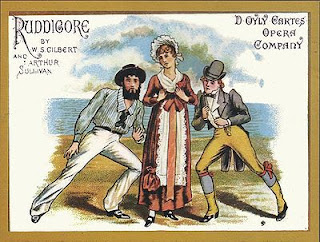 MARGARET. Oh, Master! Master! -- how shall I express the all-absorbing gratitude that-- (about to throw herself at his feet).

MAR. Yes, I know dear—it shan't happen again. (He is seated. She sits on the ground by him.) Shall I tell you one of poor Mad Margaret's odd thoughts? Well, then, when I am lying awake at night, and the pale moonlight streams through the latticed casement, strange fancies crowd upon my poor mad brain, and I sometimes think that if we could hit upon some word for you to use whenever I am about to relapse—some word that teems with hidden meaning—like “Basingstoke”--it might recall me to my saner self. For, after all, I am only Mad Margaret! Daft Meg! Poor Meg! He! he! he!

DES. Poor child, she wanders! But soft—some one comes—Margaret—pray recollect yourself—Basingstoke, I beg! Margaret, if you don't Basingstoke at once, I shall be seriously angry.

MAR. (recovering herself). Basingstoke it is!

DES. Then make it so.

-- From Ruddigore, by William S. Gilbert and Arthur Sullivan

I'm not a “squee” sort of person. I have my passions, but they're not likely to sending me spinning off into mad expostulations of delight, like poor Margaret. (The one exception is an absolutely stellar review—but there's nothing unusual about that. All authors react similarly in that situation.) I'll experience a delightful sense of anticipation when I learn about a new movie by Pedro Almodovar or a new book by Haruki Murakami or Sarah Waters. I'll savor that internal hum of excitement as I prepare for a trip to some foreign destination I haven't yet visited. Overall, though, unrestrained squeals of irrepressible glee are not my style.

Except, of course, when I hear there's a Gilbert and Sullivan troupe in town.

My love affair with G&S goes way back. I was only six when my parents took me to a concert of G&S songs that featured the legendary Martyn Green. Objectively I recognize that I couldn't have possibly understood most of the patter, but the jaunty tunes immediately had me hooked.

After that, I attended G&S performances whenever I could. I think we must have had some records of the better-known operettas (yes, this was long before CDs) because the melodies and lyrics were familiar even when I was a teen. I remember seeing a stripped down version of Ruddigore with my dad when I was in college, in a theater in the round with just a piano. I recall several exquisitely professional stagings by the D'Oyl Carte Opera Company who was in residence for two weeks in the small city nearest my home town. And the university town where I lived for more than twenty years had a local light opera group who put on a different G&S operetta every November.

I still recall the excitement leading up to that annual treat. We'd reserve our tickets as soon as they went on sale, in order to make sure we had excellent seats. As the day grew closer, I'd sometimes listen to the opera (by that time I owned recordings of all my favorites), savoring my anticipation of the moment when the orchestra would commence the familiar medley of the overture and then the curtain would rise on the town of Titipu or the Tower of London, the rocky coast of Penzance or the “fishing village of Rederring (in Cornwall)”...I could hear the melodies ringing already in my mind, the brilliant lyrics, the tripping rhymes...I'd want to jump up from my seat and applaud wildly...!

My parents were both G&S fans; my volume of the complete plays has a inscription to my mother from her older sister, dated 1940, so perhaps my grandparents were too. The man who became my husband revealed to me early on a penchant for the quarrelsome duo (Gilbert and Sullivan were renowned for their sometimes acrimonious relationship). I will admit that this was one of the characteristics that encouraged me to submit to his attentions. Since we've been married, we've enjoyed many G&S performances together. He's more subdued in his appreciation than I am. In the run-up to the play, he doesn't dress up like Yum Yum or do the hornpipe like Dick Dauntless or carry on about his sisters and his cousins and aunts...!

Some of you will remember the Rocky Horror Picture Show phenomenon. For me, Gilbert and Sullivan are a bit like that. I don't know how many times I've seen “The Mikado” or “Iolanthe” or “Ruddigore”. I know the songs and the dialogue so well that the anticipation is half the fun. I wait with baited breath for the fantastically twisted logic that will resolve the ridiculous problems of the characters.

FAIRY QUEEN. You have all incurred death; but I can't slaughter the whole company! And yet (unfolding a scroll) the law is clear—every fairy must die who marries a mortal!

LORD CHANCELLOR. Allow me, as an old Equity draftsman, to make a suggestion. The subtleties of the legal mind are equal to the emergency. The thing is really quite simple—the insertion of a single word will do it. Let it stand that every fairy shall die who doesn't marry a mortal, and there you are, out of your difficulty at once!


ROBIN. I can't stop to apologize—an idea has just occurred to me. A Baronet of Ruddigore can only die through refusing to commit his daily crime.

ROB. Therefore, to refuse to commit a daily crime is tantamount to suicide.

ROD. It would seem so.

ROB. But suicide is, itself, a crime—and so, by your own showing, you ought never to have died at all!


What subtlety indeed! What mad brilliance! And the language, so eloquent and articulate! Not to mention the music, often not appreciated (as Sir Arthur frequently complained) but far more complex than it first appears, with multi-part harmony, canons, madrigals, soaring arias, dark instrumental passages that evoke the powers of hell...!

My love affair with Gilbert and Sullivan has even seeped into my writing. My story “Opening Night” in the alternative history anthology Time Well Bent has the initial 1887 performance of "Ruddigore" as its background, as it postulates a homosexual seduction of Gilbert by a member of the cast. My novel Incognito (which has a Victorian subplot) includes a scene set in the opera house at the 1886 Boston premier of "The Mikado". I've even toyed with the notion of an erotic ménage story featuring Dick Dauntless, Robin Oakapple and Rose Maybud (since in the play she clearly can't make up her mind between the two gentlemen).

Would that count as fan fiction?

Would anyone other than a few old farts like me even recognize the allusion?

Who cares? Gilbert and Sullivan were geniuses whose oeuvre remains outrageously entertaining even in this era of instant communication and gratification. I don't have children, but if I did, I'd be playing light opera for them on a daily basis. Of course that would make it difficult for me to stay calm and fulfill my responsibilities. I'd be moved to sing, to dance, to laugh, to weep...!