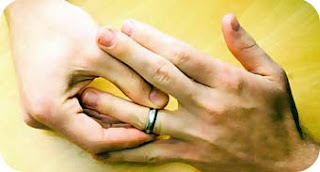 He's behind me, firm body molded to mine. The hard lump pressed against my still-clothed ass makes me dizzy and breathless. It's proof that he wants me as much as I want him. His fingers trace an electric path over my shoulders and down my bare arms. He captures my aching breasts, weighing them in his big palms while he nibbles the tender flesh below my ear. I lean back, rejoicing at the way we fit, marveling at the sense of rightness. I'm drunk with desire, floating in a languid sea of glorious sensation as he continues to explore my body.

This is special. This is sacred, this un-looked-for flare of passion, a perfect synchrony of lust shading imperceptibly into love. I didn't expect it, but oh, I recognize it. I recognize him. I know what he's thinking and feeling because his desires mirror mine. Soon we will be naked together, naked and joined. But there's no hurry. Now that we've found each other, now that the fuse has been lit, we can wait while it burns its way to an explosive completion.

Then I remember. I'm married. My husband is waiting for me, somewhere. Perhaps he might rejoin us at any moment. Perhaps I'm on business, away from home. Or maybe he's the one who's traveling. In any case, I'm not free, not completely. I can continue if I choose, reaping the harvest of this magnificent passion, but there will be regrets, recriminations, consequences. I find myself explaining this to my new partner, tears in my eyes – tears in his as well, I'm both pained and flattered to discover. I have to refuse the gift of the present in order to avoid suffering in the future.

I do love my husband. If I didn't, I wouldn't worry about cheating. I don't want to see him hurt. Perhaps it's just selfishness. When he's in pain, I hurt too. In any case, I bid my new lover farewell, trying to convey how much I want him, how much I care – how sorry I am that the promise of our desire will never be fulfilled.

This dream, or a variant, visits me pretty regularly. Often my would-be lover is a stranger. Sometimes it's a man I actually know, usually someone I'd never considered as a potential lover, occasionally someone on whom I have a crush. In all cases, the dream is cause for me to reflect. I'm not fundamentally monogamous. Before I married, I had multiple simultaneous lovers and cared about them all. Now, however, I seem to have internalized the prohibition against infidelity, to the point that I won't let myself live my fantasies even in my dreams.

It's very peculiar and rather distressing.

When my husband and I agreed to marry, almost thirty years ago, we wrote and signed a marriage contract. One of the articles explicitly allowed us to have other lovers, as long as we were honest with each other, and as long as our own relationship took priority. Yet (as far as I know) neither of us has ever fully taken advantage of this provision. We have been involved in group sexual activity and done some swapping. As I have shared previously, we spent quite a while on an (unsuccessful) search for another couple with whom we could establish a polyamorous bond. However, neither he nor I has ever gone out and had sex when the other person wasn't present.

At least, that's my excuse.

Why don't I take lovers, given that my marriage contract gives me permission to do so? Because I sense that my husband, especially now, would be deeply hurt. We're both getting older and less attractive all the time (not to mention less sexually fit – menopause is a real drag, believe me!) and I'm sure he'd compare himself unfavorably if there were another man in my life. I don't want it enough – even in my dreams – to wound him that way. And if I found a woman lover whom I didn't share with him, I actually think he'd be even more jealous.

So I satisfy myself with the occasional real-world flirtation that doesn't go any further and use my writing to play with my fantasies in a safe way. I realized when I sat down to pen this blog post that until very recently, I'd never written a story about infidelity. A few months ago, I had the urge to explore what it would be like to meet your soul mate when you were in your fifties and had been married (to someone else) for decades. The result was a story called “Never Too Late”, which is as yet unpublished.

He pushes Hollandaise around on his plate. "Come home with me," he says finally. "Stay with me." His eyes are naked. A lump of lead settles in my chest.

"I can't. I have work, responsibilities. Another life."

I have a sinking conviction that he's right. But I can't chuck everything and start over, can I?

"Your husband, your children―they'll be fine without you." As in the bedroom, he reads my mind. "Haven't you given them enough? How many years has it been? Twenty? Thirty?"

"I know you love him," Mark says. "But for those twenty seven long years, while he's had you, I've been waiting for you." He leaned closer. "I need you. More than he does."

"No." I shake my head, picturing my husband alone. Eating alone. Sleeping alone. How could I do such a thing to him? Then I look at Mark, feel the power he's broadcasting. I fight the urge to slip under the table and kneel at his feet.

He grabs my hand so hard that pain shoots up my arm. "Picture what it will be like. You'll be mine, my slave, my darling. I'll take care of you. I'll give you everything you need. We barely know each other now, but you feel the connection, too. I know you do. Think how it will be, spending months together. Years. A new life. A new start. It's never too late."

I struggle to hold back the rising tears. "No, it's just not possible. You reach a stage in your life where you're no longer free. Not even free to explore yourself."

Do I really believe this? When I'm with Mark, anything seems possible. I feel like one of the Apostles. Drop your nets and your tools and follow me, Jesus told them. I will be your mother, your father, your children. How old were they when they abandoned their lives for the Light?

What does she decide? I won't tell you now. I'm hoping that at some point the story will in fact make it into print. I will admit, though, that I went back and forth, changing the ending more than once. Because I do sometimes feel that desire is sacred, that it cannot be denied without our losing something precious.

But then the faith and trust that exist between a happily married couple are precious too.

It's hardly an easy choice.

Email ThisBlogThis!Share to TwitterShare to FacebookShare to Pinterest
Labels: infidelity, Never Too Late