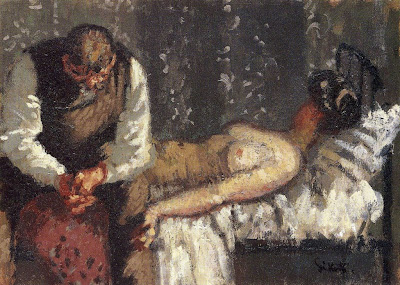 Writing fiction, particularly erotica, is a very intimate process. Consciously or unconsciously, you mine your imagination and experience to provide the stone you sculpt your stories from.

As your fiction piles up behind you like a series of cast-off skins, themes and attitudes emerge that tell you and your readers something about how your mind works and where your heart lies.

It turns out that my heart lives in the gap between who I want to be and who I am.

What I yearn for, what I struggle to achieve, what I sometimes fail at, is to be faithful: to myself, to those I love, to doing the right thing rather than the easy one.

Much of my writing is about people coming to terms with the "infidelity" that keeps them from being who they want to be. People who understand, deep in their bones, the nature of sin, the shame it breeds and the secrecy it wraps itself in.

Sin is about persisting in behaviours that damage your ability to see the world in a way that enables you to choose good over evil.

"Sinful" behaviour is pathological, it shapes the sinner, twisting them, perhaps crippling them, and making it harder and harder to be a person who does not sin.

I see infidelity is quintessentially sinful.

I also see it as a normal, perhaps inevitable, part of being human.

That's why I write stories and not sermons.

I want to ground all of this in the physical and emotional reality experienceed by those who know, deep in their gut, that if they gave themselves up to the sexual desire inside them, the world would not be enough, who struggle each day to find the grace to live well and who sometimes fail. Those points of failure are the jumping off point for a lot of my stories;

"Deserving Ruth" about a man who has failed his wife.
"Happy Anniversary" about a man in a long term affair with his sister-in-law who is forced to face the kind of man he has become,
"Happy Hour" about a woman in an affair that is consuming her but which she cannot end
"Nadica" about a good man with the opportunity to do a bad thing.
"Back When We Were Happy" about a woman so lost she no longer wants to live,
"Paying For It" about a man who betrays himself, and so on and so on.

These aren't happy tales but they aren't the kind of thing you'd find in a Hallmark movie either. For a story like this to work you have to feel the lust, to share the humanity, to care about what happens next.

Let me show you what I mean. Here's a short monolgue that gets to the heart of the matter.

I hope to see you again next week. In the meantime, enjoy.

We all have secrets. You have one don't you? Don't look so shocked. You're in your forties. You have a ring on your finger. My guess is that you've been married a good long while now. You look like a nice person. I'll bet you're good with kids and animals and so on. So, seeing all that, I know you have to have a secret.

You don't even have to think about it do you? I can see it in your face. It's there, just below the surface of your mind, pecking at you like a chick trying to hatch, that thing that you know that your wife doesn't, the one that would change everything, the one that you desperately hope doesn't define who you really are.

No. Don't get up. If you'd really wanted to get up you'd have done it when I sat opposite you in this cosy little booth, in this quiet little bar, where it feels like midnight even when it's noon outside.

Stay. Finish your drink. Let me tell you more about secrets.

Well that sat you down fast enough. Who'd have thought that a cute little thing like me could make a big man like you sit? Amazing what producing a brown envelope and a smile can do.

Do you know you're holding your breathe? I've been told that men feel it in their balls; the anticipation of being caught. You're wondering what I know and what I can prove and whether there is hope for you in the gap between the two.

But I bet that some small part of you, possibly even the part that you think of as "really" you, is more relieved than afraid.

People start out thinking that the hardest thing about a secret is keeping it. But someone like you, someone who's had a secret for a while, someone who's learnt that they can smile and lie and not get caught, you know that the hard part is that, in the end, the secret keeps you.

You're good at this. By now lots of guys would've started to speak. Started to deny or threaten or even plead. But you're sitting there silent because, speech, any speech at all, might give you away. I bet you'd be a real good poker player, except I suspect you don't like to gamble unless you have to.

No. Don't relax, not yet, I didn't say that your secret was like that. Because we both know that the real secret is about who you've become.

Do you do that a lot, turn your wedding ring between finger and thumb? I bet you do. I bet you know why too. It's because you love your wife. And you want her to love you. But even when she looks in your eyes and says she loves you, when she opens her legs and welcomes you in, when she comforts you on the nights you can't sleep, you know she doesn't love you. She can't love you because she doesn't really know you. If she knew who you really are then she'd know the secret and then what?

What do I want?

That's what you say when you finally decide to speak?

Nice move. Let's stop talking about you and talk about me instead.

Nope. That's not going to happen. This isn't about what I want. This is all about you and your secret.

Do remember what it was like before the secret? When your wife trusted you and you knew you deserved it? Then, if she was sad, you knew it wasn't your fault. If you made her happy you knew her joy wasn't tainted by lies. You were happy then.

Those nights when you can't sleep no matter how tired you are, the ones when you lie awake thinking and hope that she won't notice. Think about what's really keeping you awake. With some men it would be the fear of discovery. Not you though. You're careful. Very, very careful.

But you're still afraid.

You're afraid that somehow, at some level beyond facts and logic, she already knows.

You're afraid that she is also pretending.

You think about it don't you? What it will be like when the kids have gone and there's just the two of you, alone in the house except for the secret that neither of you mentions.

Tears. Good. I hoped for tears.

I cried when this happened to me. When I was liberated from my secret.

The envelope is empty by the way.

What happens next is up to you. I think you're brave enough to break free of your secret. I hope so.

If you do, I ask only one thing: find someone who needs this envelope, needs it as badly as you did, and give it to them.