Away in a Manger...the Baby Jesus got eaten by a lion.

(I wrote the original version of this post in 2003, long before I had children or even thought I would have children. Coming at this topic from a parental angle, I've expanded on my original thoughts.)

I am not particularly religious. I was raised vaguely Christian in an area of South Florida that was religiously diverse. I spent kindergarten through second grade attending a private Baptist school where the religious teachings, circa 1970s, suggested Jesus was a hippie and God was a benevolent grandpa. Funny how kids look at things. I memorized the books of both the Old and New Testaments at an early age (and can still recite them almost perfectly), but beyond that and learning about Noah and the ark and Jonah and the whale, I didn't retain much.

Now that I have children of my own, I find myself with the dilemma of what to teach them. I don't attend church and I don't have strong feelings about any particular religion. I have been called an atheist, but agnostic is probably a better fit. (Though the belief system I find myself most aligned with is Buddhism.) So what do I teach my kids? I suppose I will muddle through it as the situation arises, explaining what the Christmas represents and fielding questions about why we put up a Christmas tree. I do so love the pagan roots of the Christian traditions, so that part will be fun. But... what about the nativity? How do I explain the little dollhouse with Jesus and family? That is a dilemma.

One of my favorite childhood memories is setting up the nativity each year and hanging the angel named Gloria just so in front of the single lightbulb that illuminated the whole shebang. The stable had a straw-like roof, the wise men were appropriately ethnic (never mind that Mary, Joseph and the baby Jesus were all peculiarly white) and everyone had a happy, reverential expression. I remember being disappointed there wasn't a little drummer boy, not realizing the song was written in 1958 (I just looked that up) and had nothing to do with the story of the original nativity. 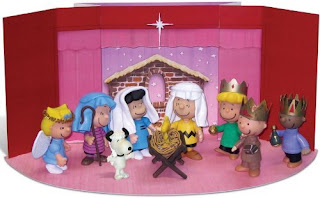 I don't currently own a nativity set and have been searching for years for just the right one. Now that I have children, I'm more determined than ever to find a nativity that is reminiscent of the one I grew up with. These days, you can find a nativity scene of just about every flavor--including the Peanuts characters. But that's not the kind of nativity I want. Despite my lack of interest in most things Christian, I am picky about what I'm looking for in a nativity. What do I want?

I want a nativity scene that includes all the principles and isn't made out of plastic, fabric or cork. I want Mary, Joseph and the baby Jesus to be made of an appropriate material and have real faces. I don't want them to be faceless art deco blown glass, burlap dolls bound with twine or abstract burnished metal silhouettes.

I want the three wise men with camels and the angel Gloria in all her blonde glory.

Speaking of stables, want a stable that looks like a stable and not a shoebox, a trailer or a Barbie Dream House. I want animals that belong in a nativity: cows, oxen, sheep and donkeys. Maybe a cat, but certainly not dogs, and definitely not a lion. I kid you not, I've seen a nativity with a lion.

It would be preferable if the baby Jesus were removable from the manger for those who wish to observe the tradition of leaving the him out of the nativity until Christmas day. I personally don't care, but it's a nice touch. It would be good if Gloria hung from the front of the stable and even better if there were a lightbulb behind her to cast a ethereal glow. 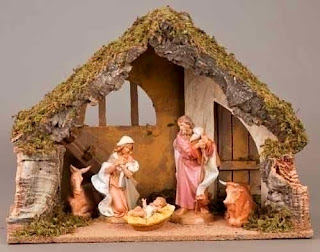 The Fontanini family comes closest to meeting my demands-- and they've been doing it for over a hundred years. They're expensive, but it's amazing what I'm willing to pay to have a baby Jesus who looks like a baby and not a Weeble. Of course, Patrick and Lucas won't care about my precious traditional nativity and will likely use the holy figures as drivers for their cars and trucks. Or as projectiles against each other. Hmm... maybe that Peanuts nativity isn't such a bad idea after all.