Everything I Know About Science Fiction. Really.

Fine. I will tell you what I know about science fiction:

I have written one and only one science fiction story. I wrote it about twenty years ago so my memory is fuzzy, but it involved a woman who was desperate for a baby. She purchases a fertilized embryo and grew it in an artificial womb, much like a terrarium. Ultimately, she discovered motherhood is not all it's cracked up to be. I submitted the story to only one market, a major science fiction magazine. I received a pre-printed rejection letter, the kind that says: "Dear Author, Thanks for letting us consider your work. We regret we will not be able to use your story." That was disappointing in itself, but some editor had taken the time to scrawl in the margin of the form rejection, "This topic has been done to death and done better." Ouch. I still have that letter somewhere.

I read some Robert Heinlein in my formative years. The problem with reading science fiction that was written in a previous era is that the contemporary conventions of the time often creep into the narrative no matter how impressive the world building skills of the author. I found his work strangely discordant--his futuristic worlds seemed contrary to the sexism I perceived. But Heinlein did give me reason to consider the benefits of alternative relationships, including polyamory.

Hmm. I'm wracking my brain for other science fiction I've read. Does The Handmaid's Tale by Margaret Atwood count as science fiction or fantasy? Brilliant (and frightening) book. I also read and enjoyed Suzette Haden Elgin's feminist science fiction novel Native Tongue for a women's studies class called Women, Language and Power. I've read some Alan Dean Foster and have fond memories of his novel Flinx in Flux, mostly because I was reading it on a visit to my soon-to-be husband.

I'm running out of science fiction anecdotes to share...

I'm a reluctant fan of the original "Star Trek" series. My favorite character was Spock and my favorite episode was "The Trouble with Tribbles." That is the only episode title I know, actually. I have only seen bits of the other "Star Trek" series, but I have seen all of the Star Trek movies, always at the suggestion of other people. (I'm a movie slut, I'll go see just about any movie. Really. Even stuff with Adam Sandler.) My favorite Star Trek movie was the last one, but I don't remember the title.

I've seen all of the Star Wars movies, too. Both the first (middle) trilogy and the second (first) trilogy. I always found that confusing, but whatever. I preferred the first trilogy, despite the low-tech special effects. I was never much interested in the Death Star or light sabers or storm troopers or any of that. I was interested in the relationships. I was interested in lurve, as Charlotte might say. I thought Luke and Leia belonged together and that Han Solo should travel through time and marry me. Sadly, that was not to be. In a soap operaish turn, Luke discovered he had made out with his own sister and that his father was the ultimate Bad Guy. Poor Luke. But Leia got Han (and a skimpy harem girl outfit) and all was well. And then George Lucas went back to the real beginning and introduced a bunch of new (old) characters and completely lost me. Poor Darth Vader. So sad.

And that concludes my knowledge of science fiction. Oh, I forgot, I've also seen Firefly and Serenity, though I can't remember which was the series and which was the movie. Personally, I prefer Nathan Fillion in Castle, even if he does look amazingly hot with a gun strapped to his thigh...

On that note, I leave you with a science fiction tribute to the season. Happy Holidays to you all! 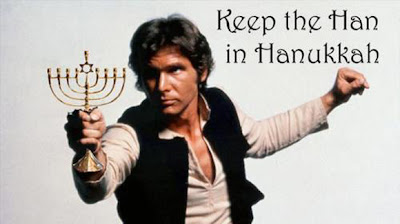