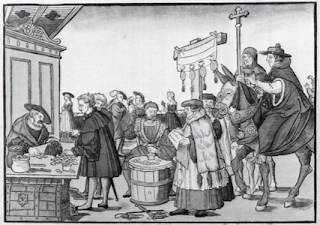 What does it say about me, that when I learned this week's topic, “Indulgence”, I thought not about chocolate, sex, or tropical vacations, but of ecclesiastical indulgences?

I'm not going to even speculate about the way my mind works. Once I'd fastened on this interpretation, though, I decided to stick with it, since I suspect my worthy colleagues will provide more than adequate explorations the alternative meaning, namely, immersing oneself in extravagant pleasures.

For those of you who don't have time to flip over to Wikipedia, I'll summarize. The Roman Catholic doctrine of indulgence allows the temporal punishment for sins (that is, the amount of time the sinner will be required to spend in hell or purgatory) to be reduced if the sinner performs certain types of activities: prayers, pilgrimages, acts of charity or acts of renunciation. These acts do not forgive the sin itself – that requires the sacrament of confession, and subsequent absolution – but address the issue of punishment after death, which remains due even after the sin has been forgiven.

Indulgences became infamous during the Middle Ages, when various individuals handed them out wholesale in return for money – often very large sums. The cash received for indulgences financed lavish (indeed, “indulgent”) lifestyles for bishops and other powerful clergy, the building of grand cathedrals (not to mention palaces) and the expenses of the Crusades. The abuse of indulgences was one motivation for the Protestant Reformation.

It's clear that these abuses weren't sanctioned by official doctrine. However, it seems to me that even the orthodox view of indulgences, as I understand it, smacks of bribery.

Please note, I have no interest in getting involved in theological disputes. The opinions expressed in this blog are my own possibly benighted views, and it may well be that I'm destined to burn in hell. (Certainly, my mother, having seen the portfolio from my nude photo shoot, thought so – and she never even read any of my books.)

Consider the basic idea, though: do something “virtuous” or “holy”, and your punishment will reduced by a certain amount, the degree of reduction determined by the Church-assessed value of your actions. Sounds like bribery to me. The economic, tit-for-tat nature of the doctrine becomes even clearer when money, such as a donation to charity, is involved.

Although I'm not conventionally religious, I do consider myself a spiritual person. The doctrine of indulgences doesn't fit at all with my concept of the Divine. For one thing, if you've been forgiven, why should you still require punishment? I'm not talking about making amends; I think if you've harmed someone, it's only just to try setting things right. Punishment doesn't address the issue of damages. It's sole purpose is to make the sinner miserable and aware of his or her guilt.

I can't believe in a God so petty that He'd want His creations to suffer after He'd pardoned them. On the other hand, my vision of God (to use the conventional term) is not as an entity or Supreme Being (even though I may sometimes use that shorthand mode of expression). My God doesn't have opinions or desires. My God is the pure creative energy at the heart of the universe, the Infinite Intelligence underlying the astounding diversity of the external world, the awesome power of imagination, the Spirit that infuses us all.

I know that traditional Christianity disagrees, but I find it difficult to accept that our sins “hurt” God. I definitely do think that certain actions normally categorized as sins hurt the sinner. In a similar fashion, in my view at least, mindful prayer or meditation, acts of generosity, spiritual voyages, don't change God – they change us, making us (hopefully) more compassionate, more careful in our choices, and perhaps, more at peace with ourselves.

In all fairness, religions other than Christianity (at least as practiced by ordinary people) embody similar economic concepts. Theravada Buddhists in Southeast Asia (Thailand, Laos, Cambodia and Myanmar) “make merit” to improve the quality of their next life. Making merit includes everything from giving beggars alms to building new temples. I remember years ago our Thai teacher told us she donated to buy coffins for the indigent as a way of making merit. Hindus, I believe, bring offerings to the altars of their gods and make pilgrimages to sacred sites, and expect favorable rebirth or even enlightenment in return.

I suppose it's not surprising that people think of salvation as something with a price tag. Humans have been engaged in commerce since the earliest tribal societies – and we have always tended to create gods in our own image. It's much easier to understand a deity who thinks like we do.

If I only read the Bible for 25 minutes, that's not enough for God? If God is eternal, why should He care about clock time?

Just doesn't make sense to me. On the other hand, maybe the mysteries of the Spirit are not supposed to make sense.

And maybe I should have written about chocolate and sex after all.