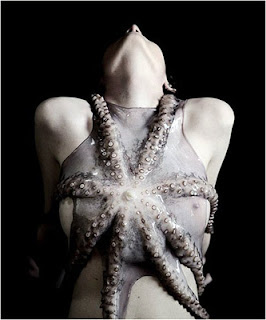 I'm not much of a horror fan, in film or in literature, partly because the genre tends to evoke unpleasant emotions. Poorly conceived or executed horror just seems silly and useless, a waste of my precious time. Horror written or filmed with skill and subtlety scares the bejesus out of me and can trigger nightmares. I don't seek out either extreme, though occasionally I'll end up subjecting myself to something gory, gruesome or terrifying by mistake.

There are two exceptions. One is Edgar Allen Poe. In Poe's hands, horror become poetry, and my literary appreciation overcomes my aversion to fear. The other is H.P. Lovecraft.

During my undergraduate days, someone introduced me to Lovecraft's work. In turn, I introduced my father. Together we devoured the Lovecraft oeuvre: “The Colour Out of Space”, “The Shadow over Innsmouth”, “At the Mountains of Madness”, “The Dunwich Horror”. Through Lovecraft's tales, dad and I prowled the streets of Arkham – modeled after a Massachusetts city not far from our home - and roamed the wild. stony hills to the west, where ancient horrors lay buried under the still waters of the modern reservoir – never named but obviously the Quabbin. We joked about altars to Cthulu; we contemplated the ghoulish music of Erich Zann. For decades, dad and I would return to Lovecraft again and again. My current volume was a Christmas gift from perhaps a decade ago, only a few year years before his death.

Why did Lovecraft's work hold such appeal? From the perspective of craft, the peculiar recluse from Providence, Rhode Island didn't begin to match Poe. Lovecraft's stories seem flowery and over-written, especially by today's standards. His complex, meandering prose is studded with polysyllabic adverbs and self-conscious inversions of structure. Nevertheless, somehow, Lovecraft managed to capture a true sense of dread – to hint at an impenetrable darkness underlying the banal realities of every day life. And that, it seems to me now, is the essence of horror.

Explicitness is one notable characteristic of today's horror. Last week Charlotte talked about “Alien”. In the one scene I recall (perhaps from a trailer – I'm really not sure), a parasitic alien creature forces its way out of the chest of a character in which it has been growing. You see every detail of ripped flesh, every disgusting inch of the emerging monster. Horror these days means geysers of blood erupting in the wake of a slasher's axe, or the corruption and decay of a long-dead body - rotting intestines, eyes torn from their sockets, white bone glimpsed through rifts in blotchy, diseased skin.

Lovecraft's horrors are more often glimpsed, sensed, or intuited than fully revealed. Even when the protagonists are finally confronted with the awful truth, the horrors they face are “indescribable” and “unimaginable”, too monstrous to be more than imperfectly captured in human language. Then, too, Lovecraft often wrote about inner terrors – the threat of madness looming over us poor humans as we try impose some order on a chaotic, evil-infested universe. “Inchoate dread” is one of his favorite phrases – incipient, formless, hovering on the edge of being, but nevertheless a shadow one cannot escape.

Lovecraft skirted the edge of madness himself – and so have I. I spent months in a state psychiatric hospital as a teenager. The shambling, zombie-like walk of my drugged fellow patients still haunts my dreams. Actually, I discovered Lovecraft only a few years after that stay – perhaps the recognition accounts for my perverse attraction to his work.

Quite a while ago the Erotica Readers & Writers Association had theme challenge on their Storytime list: parody. I ended up writing a tale that captures the flavor of Lovecraft's prose, while including a great deal of (pretty horrible) sex. The title is “The Shadow Over Desmoines”.

My hand trembles as I pick up the pen to begin this chronicle. Every fiber of my being recoils from the thought of reliving the events that led to my incarceration in this house of madness. However, my doctors here are convinced that writing about my "delusions", as they call them, will help to purge me of them. I have my doubts. The lights here in the hospital burn day and night, and we are always attended, but this does not dispel the irremediable darkness in my soul, nor assuage my awful loneliness.

Still, I will make an effort.

It began six months ago. I moved to Iowa to make a new start, after my dear wife passed away and I suffered a moderately severe heart attack. I had been a newspaperman in our small New England town, but my cardiologist recommended that I retire from that relatively demanding occupation. After Evelyn's passing, I was troubled by nightmares, distorted melanges of disturbing imagery suffused with a indescribable sense of horror. In coming to Des Moines, I sought peace, a respite from my grief-induced visions. Iowa, I reasoned, would be the essence of normality, sanity, midwestern friendliness and common sense.

How mistaken I was in my sanguine rationalization.

I purchased a pleasant, sunny bungalow on a quiet, maple-lined street near the bus line. Once I had settled in, with my books and my records neatly stored, I looked forward to days of reading and contemplation, interspersed with an occasional fishing trip, and tranquil nights. At first, it seemed that I had achieved my objectives. I slept soundly and dreamlessly. I took long walks, and made a start on the book that I had always planned to write. I became friendly with Horace Farmer, the librarian at the neighborhood branch, who I discovered enjoyed a game of chess, a beer, and a philosophical discussion as much as I did. Though I am nearer fifty than sixty, my heart problems have left me somewhat frail. I welcomed the opportunity to relax and appreciate the deliberate pace of midwestern life.

I met Leonora Gratsky two weeks after I moved in. She appeared at my door with a home-baked blueberry pie and an irresistible smile. Though properly, even primly, dressed, and extremely well-spoken, she radiated some indefinable quality of carnality that made me distinctly uncomfortable. Leonora was petite, with sharp elfin features. I could not refrain from noticing the voluptuous curves of bosom and derriere under her high-necked blouse and calf-length skirt. Her gray-streaked black hair was pulled into a conservative bun, but when I looked into her dark eyes, I saw an untrammeled sensuality that simultaneously attracted and appalled me.

We conversed in a neighborly fashion for several minutes. Apparently, she inhabited the house across the street, a dwelling somewhat larger than mine but equally neat and ordinary. Perhaps the gardens surrounding it grew a bit more wild and rank than was typical on our street, but the place appeared to be in good repair. I told myself that different people have different standards, although somehow the lush vines tumbling over her fence and creeping across the sidewalk engendered an inexplicable uneasiness in my soul.

She lived with her nephew Frederick, she told me, a strapping young man of twenty five year who, unfortunately, had the intellect of a child of seven. He was a comfort, managing the heavier tasks around the house and never causing any trouble. Since her husband passed on two years ago, she was especially glad of Frederick's company.

Leonora encouraged me to drop by and visit anytime, but I doubted that I would take advantage of her offer. Shivers ran down my spine as I watched her swaying hips retreat down my path and across the street to her own dwelling. Nevertheless, I found my body reacted to her as if I were fifteen intead of fifty four. I had to spend a quarter of an hour reading Popular Mechanics before my tumescence subsided.

I tried to forget my curvaceous and disturbing neighbor. Despite my best intentions, I found myself looking over toward her house from my window, both night and day, straining to catch a glimpse of her. I never saw her, though occasionally I discerned a hulking male figure shambling around the place, dragging heavy black bags of trash. I assumed that this must be the feeble-minded nephew. I like to think of myself as compassionate toward those less fortunate than myself, but something about his fleshy form and beetling brow repelled me.

You can read the rest of the story on my website, if you're so inclined. It's pretty funny, in considered opinion, but I'd like to think it captures a hint of the terror Lovecraft, at his best, evokes – indescribable but nevertheless real.

Posted by Lisabet Sarai at 9:00 AM