Confessions of an average housewife

Sounds like the heading on a supermarket rag. Here are a few of my confessions: 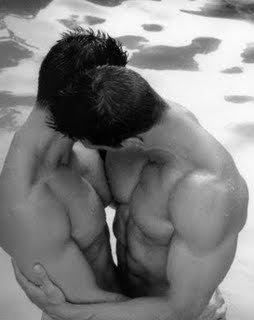 So many of the things I've written about? No actual experience involved, which is probably a given since I am, in fact, a woman. All my published work to date is m/m (I have some m/f and menage stories contracted for later this year, but the meat of my work is gay), and the single question I'm asked the most often is:

How can you write about gay sex?

This is meant one of two ways: the homophobic way, and the interested way. To the interested way, I've boiled down my answer to: imagination, after all, it is fiction. I'm not writing a how-to-guide or a memoir.

The homophobic form of the question doesn't deserve an answer.


2. Like Lisabet, I wish I could actually see m/m sex in the flesh.

One of my fondest fantasies. Does that make me a fag hag I wonder? No, I don't think so. But for some reason, it's a compelling thought.

3. Experiences I've had have found their way into my books.

Aha! you say. She just said it was imagination! Well, yes, some of it. Obviously I've never stuck a penis into someone else. But...

(My relatives and innocents, please leave the room)

I have given head. Many times. To many different people. I've been penetrated anally and have done the penetrating with my fingers. Yes, I have found the mysterious prostate.

I just finished a short story, which will be coming out in May, in which I have a hero who sleepwalks naked and climbs into bed with his neighbor. Not to give anything away, but this is entirely based on my own experiences sleepwalking. I didn't have him do anything under the influence of his subconscious that I hadn't done myself. Even so, I bet there'll be someone who claims, oh that could never happen. I beg to differ! And I have witnesses. :)

There's a line from a country song (I'm sure I could Google it, but I'm pressed for time), that goes something like this:

"I ain't the woman in red, I ain't the girl next door.
But if somewhere in the middle's what you're looking for,
well, I'm THAT kind of girl."

And that sums me up perfectly.
Posted by Stacey at 10:02 PM