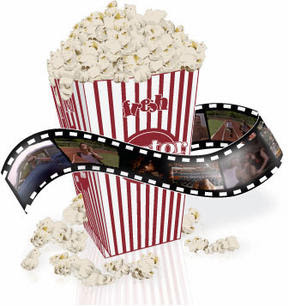 No, please! Don't spoil my movies, too!

Garce's topic this week is "Movies and the Art of the Story". Now, I know that Garce tends to analyze the films he sees, trying to figure out what makes them work. He and I have had a number of email conversations about "The Silence of the Lambs" and "Das Boot", among other films, in which he waxed eloquent regarding what he'd learned about characterization of villains and the slippery nature of evil. I deeply respect his dedication to his craft. But for me, most of the time, movies are entertainment, not education.

I've been an avid reader since I was a toddler. Alas, since I've begun writing professionally, reading is not the same. Most of the time, I can't turn off my inner critic. I find myself noticing flaws -- flat characters, rough passages of prose, anachronistic detail or implausible turns of plot. Meanwhile, my admiration for well-crafted fiction is tinged with sour envy. I still enjoy reading, but it's no longer purely recreation. My perspective has been irrevocably changed -- I might even say tarnished -- by my author's vocation and the painful knowledge that comes with it.

I really don't want that to happen to film. For me, an effective film is still pure story. The best movies whisk me away to another world, immersing me in the lives and emotions of the characters. If I were to start analyzing the dynamics, the writer's or the director's artistic choices and strategies, that would pull me out of the experience.

Not that I can't appreciate an ingenious plot or a particularly adept characterization. I remember being impressed by both aspects of the 2006 film "Inside Man" (Clive Owen, Jodie Foster, Denzel Washington). I recall thinking, in one scene, "Wow, this is a great way to reveal her character." But that kind of reaction is moderately unusual, especially for a movie that succeeds in pulling me in.

I'm much more likely to notice the visual aspects of a movie. Among my favorite films is "Winter Sleepers" (1997), directed by Tom Tykwer. This movie uses color as a mirror for its elegant structure. In each section of the story, the characters are wearing a different hue, which is also echoed in the sets. This may sound silly and overly formal, but it really works, in my opinion.

If you're curious about my other favorites, you can check out the (relatively short) list on my website. I haven't updated that page for a while, but reviewing it, I'm surprised that "The Rocky Horror Picture Show" isn't listed. Other candidates include "Earth Girls are Easy" (1988, starring Geena Davis and Jeff Goldblum), "After Hours" (1985, with Griffin Dunne and Rosanna Arquette, directed, I just discovered, by Martin Scorsese), "The Comfort of Strangers" (1990, starring Christopher Walken and Helen Mirren), and "Bound" (1996, with Jennifer Tilley and Gina Gershon).

I realized in searching IMDB.com for this information that all of the movies above have an element of eroticism. Not all that surprising, I suppose, given my chosen literary genre and my self-confessed (see my bio!) "lifelong interest in sex", but this may give the impression that sexy movies are the only ones I see (or like), which wouldn't be true at all. But it does appear that an element of sexual passion contributes to my remembering them.

When I was a kid, going to the movies was a big deal. It didn't happen very often and was a special treat. In my teens, I could still count the films that I'd seen on two hands, and could tell you the plot of each one. At this point in my life, I've probably seen close to a thousand movies. It's a bit disturbing how few of them have stuck in my mind.

Perhaps if I analyzed the ones that I do remember and cherish, I'd find that they demonstrated the elements of craft that I recognize in my reading. Who knows, perhaps they are especially good examples of "the art of the story".

I don't really care. When it comes to movies, I would like to remain innocent, to react without trying to figure out exactly why. Sorry, Garce, but I watch movies just for fun.

Email ThisBlogThis!Share to TwitterShare to FacebookShare to Pinterest
Labels: art of the story, movies