The Grip crew would like to welcome author Helen Scott Taylor...

Many changes have happened in my life during the last few years; some connected with the business I run with my husband, but most to do with my writing. Since I started writing, my horizons have expanded in a way I never expected. Doing something that necessitates me sitting in front of a computer all day has surprisingly been the impetus behind my travelling to and for the first time. I now have writing friends and contacts in , , Europe, and .

The most significant change, though, happened when I won the American Title IV contest in 2008. The prize was a publishing contract with Dorchester Publishing. On the day the final result was announced, I went from unpublished to published. A transition I’d longed for since I started writing in 2003, but never dreamed would come from winning a contest.

After the initial euphoria of winning subsided, the practicalities took over. My life has transformed in ways I didn’t expect, yet not in ways I did expect. I thought I would feel different, but I feel the same as before I was published. Maybe, because I intended to persevere until I achieved publication, I was already prepared.

One of the unexpected changes has been the shift in attitude of some of my family members toward my writing. After years of feeling slightly uncomfortable when questioned about the amount of time I spend sitting in front of a computer apparently achieving little—in their opinion at any rate—I now have something concrete to show for my efforts. I no longer have the uncomfortable itch along my spine when family members peer at me as I’m typing. They used to wonder why I choose to closet myself away with a computer rather than talk to them, or cook the dinner, or... fill in the blank. Now that I’m published, I’m legitimate. I can type without guilt. Amen.

I have also noticed a subtle shift in other writers’ treatment of me. Published authors now treat me as one of the gang. Some unpublished writers now seem to think I’ve achieved super-human status. I wish!

One of the major differences has been the change in emphasis on where I spend my time. Over the years, I’ve taken many online classes, and read many books on writing craft. Now my focus has switched to subjects such as branding, online promotion, and book marketing. I’m back at the bottom of a steep learning curve. And I now seem to have less time than ever to read for pleasure—one of the changes I regret.

Perversely, now that I’m published, I find I have less time to write because promotion is a time suck of monstrous proportions. I have lost count of the number of blogs and interviews I’ve done. I’ve spent hours researching where I can advertise online. This is something I consider a transition problem that I need to smooth out. Once I get the hang of juggling all the new balls, I hope to allocate my time better.

One of the most significant and stressful things is the change in people’s expectations of me. (Or possibly just my expectations of myself.) Now I have a book published, I feel everyone will expect more from me. I’ve heard other newly published authors say that the first book they wrote after selling was the most difficult. I concur. I’ve succeeded in selling one; I must sell the next. I must improve with each book. This problem is exacerbated, as the book I’m now writing is a sequel to The Magic Knot, set in the same paranormal world featuring some of the same characters. The is the first series book I’ve written, so I’m faced with the new challenge of writing a book that must stand alone, but not over-explain the world and background enough to annoy those who read the first in the series.

In the past, the only praise or criticism my writing received was from critique partners or contest judges. Now when I type my name into Google thousands of sites come up. I’m in the public domain, fair game to everyone with an opinion and access to the Internet. I have always told myself I can’t expect to please everyone (especially after a particularly scathing comment from a contest judge). But now I have reviewers commenting on my writing and I’m no longer reading the comments in private; the criticism is available for all to read—but so is the praise. So far, I find I can handle both criticism and praise without problem. Of course, no one has slammed my book yet.

I’ve also had some notes from readers who’ve loved The Magic Knot. To hear from readers is the icing on the cake of being published. For me the nirvana of publishing is sharing the stories one has nurtured from a germ of an idea to a much-loved finished story.

Finally, one of the biggest changes on publication is that someone actually paid me for writing. (Not a lot, but hey, it’s something.) The concept that people are parting with money to read my story is interesting. I still haven’t quite got my head around that, but maybe I over think things. 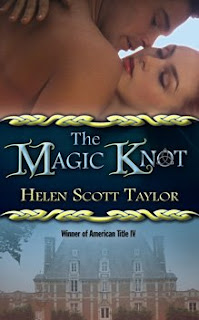 The Magic Knot is published by and available from all good book stores and online book retailers. To read the first two chapters, go to www.helenscotttaylor.com Click on the cover to buy:

HE’S A BIKER WITH AN ATTITUDE

What woman wouldn’t be attracted to Niall O’Connor’s soft Irish brogue and dark good looks? But Rosenwyn Tremain must find her father, and she isn’t going to let a sexy, stubborn Irishman and his motorcycle distract her. Rose’s intuition tells her he’s hiding something, a secret even the cards cannot divine. Her tarot deck always reads true, but how can one man represent both Justice and Betrayal?

SHE’S A WOMAN ON A

Magic. Niall’s body tingles with it when he finds the woman snooping in his room. Rosenwyn might believe she’s a no-nonsense accountant, but her essence whispers to him of ancient fairy magic that enslaves even as it seduces. Her heritage could endanger those he’d die to protect, but her powers and her passion, if properly awakened, might be the only thing that can save both their families, vanquish a fairy queen bent on revenge, and fulfill a prophecy that will bind their hearts together with…THE MAGIC KNOT

Rose Tremain sat on the chair before his desk, his Magic Knot cradled in her palm. She swayed slightly, her eyes dazed and dreamy. His nerves sparked. Need for her struck like lightning. He managed to suck in air, to ruthlessly crush the feeling until his body calmed.

So, he had been right. Rose Tremain was more dangerous than she appeared. She’d been sent to enslave him by capturing his stones. If she thought he’d give in easily, she had another think coming.

Silently, he walked forward and closed his hand over hers. His vision blurred at the whip of sensation. Too late, he realized his mistake in touching her. Gritting his teeth, he fought the mental pull as she sucked his very essence through their joined hands into a deep hidden part of her that whispered of ancient magic and mystery.

Niall snatched up his Magic Knot and stumbled back. His breath came in short gasps as he stared at her in shock. Rose was the Cornish pisky Tristan wanted. How had she stopped them from sensing the truth about her? That deception alone proved she was up to no good.

Slowly, her green eyes focused on him. Confusion set tiny creases between her delicate brows, then surprise chased them away. She slapped a hand over her mouth.

“Aye, be afraid, little thief,” he whispered. “You’ll pay dearly for your deception before I’m done with you.”

Find out more about Helen at the following links:

I blog at www.titlemagic.blogspot.com
My website is www.helenscotttaylor.com
Buy link is http://www.dorchesterpub.com/Dorch/productdetail.cfm?product_ID=2303&L1=2
Dorchester is the best place to buy at the moment as they have it on an introductory offer of $3.50
Amazon http://www.amazon.com/Magic-Knot-Spell-Paranormal-Romance/dp/0505527960/ref=sr_1_1?ie=UTF8&s=books&qid=1225207032&sr=1-1
Posted by Cindy Spencer Pape at 9:19 PM